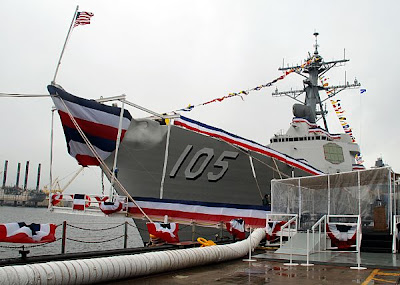 PASCAGOULA, Miss. (NNS) -- Under gray skies providing a slight, cold drizzle, Deborah Mullen stepped before the massive 9,200-ton guided-missile destroyer and, with all the grit her slight frame could muster, gave it a good whack, just under the "bullnose."

The ship's freshly painted gray hull gave up only a hollow "clunk" as the bottle she gripped with both hands in baseball-bat fashion glanced off its edge.

Laughing, she took another more determined swing, and this time the christening bottle of champagne broke, wetting the bow of the Navy's newest Arleigh Burke class ship, Dewey (DDG 105), Jan. 26 in a ceremony before a crowd of about 1,000 at Northrop Grumman Ship Systems Ingalls Operations here.

"There are actually no words to describe today. Having been a Navy wife for all these years, having my sons serve, being a sponsor of a ship is probably the greatest honor I have ever had," said Mullen, wife of Adm. Mike G. Mullen, chairman of the Joint Chiefs of Staff.

Mullen's service as the ship's sponsor puts her in the same company as presidents' wives and descendents of war heroes in a tradition that dates back to 1797. Secretary of the Navy, Donald C. Winter invited her to serve as the ship's sponsor last year while her husband was serving as chief of naval operations.

Before the ceremonial bottle breaking, the chairman and his wife extolled the need for readiness in the force. The admiral called readiness the warrior's response to the nation's call.

"It's practice, training, it's an undaunted commitment to develop skills that produce efficiency," he said.

Deborah, however, added family readiness to the equation.

"I believe family readiness ... is integral to military readiness," she said. "And we need to make sure that our military families are given the support, resources, and education to succeed, to become resilient families ready to face the challenges and opportunities of the military lifestyle."

Deputy Defense Secretary Gordon England called Deborah "a champion for those in uniform and dynamic family advocate." England named the ship when he served as the Secretary of the Navy in May 2004, and said that Winter made the right choice for its sponsor.

"The saying goes that the hardest job in the Navy is that of a Navy wife. And Deb has given 37 years to our Navy, and she and Mike together have met every challenge," England said. "Our Navy and our nation are better for her contributions."

During the admiral's tenure as chief of naval operations, his wife worked to enhance the Navy ombudsman program by creating training programs, said Capt. John Kirby, the chairman's spokesman. She also was critical in creating a network of family and spouse support programs, such as Navy's FamilyLine, an online spouse-support network.

"Mrs. Mullen has been a champion of military families for decades and has worked very, very hard to make sure that their sacrifices and their hard work and their efforts are both recognized and supported," Kirby said.

In the aftermath of Hurricane Katrina, Deborah helped man the phones at Task Force Navy Family, reaching out to affected Navy families, including retirees.

Kirby called Mullen's selection as sponsor a "very fitting tribute to the depth to which she cares."

At the ceremony, Mullen was flanked by her two sons, John and Michael, who both are Navy officers, one in aviation and the other in surface warfare. Also with her were long-time friends Emmy White and Laurie Armstrong, who served as her matrons-of-honor. Another matron-select, Lori Tamulevich, could not be present for the ceremony.

The christening signifies that the ship is seaworthy, but it is still about a year away from being operational as a destroyer. While the outside is painted and pristine, with colorful signal flags adorning the ship from bow to stern, the inside is a literal web of wires – 1.5 million feet worth – and the floors are planked with plywood. The unfinished steel walls are covered with hand-scrawled numbers and directions for placement. Computer systems and equipment are covered and protected.

The ship was put in the water Jan. 18. Northrop Grumman officials said they hope to have all of its power working in June. Its crew will then be brought in and the ship will be put through a battery of performance tests before being commissioned and turned over to the crew for sailing to its home port of San Diego.

The ships here are put together like "Lego blocks" as described by Northrop Grumman officials. Each is built in one of its cavernous bays on the sprawling 800,000-acre shipyard on the Pascagoula River at the Mississippi Sound. After the sections are built individually, they are moved and pieced together by huge transporters and cranes capable of hauling hundreds of tons.

In all, there are about 3.5 million pieces to the ship and more than 2,000 workers will be involved in building a destroyer over five years. Northrop Grumman has more than 11,000 employees at the yard in Pascagoula. The yard suffered about $1 billion worth of damage from Hurricane Katrina. It is now back to about 85 percent of its capacity, officials said. Eight other ships are under construction here.

Designated the DDG 105, the new destroyer honors Adm. George Dewey, most famous for leading his squadron of warships into Manila Bay on April 30, 1898, and destroying the Spanish fleet in only two hours without a single American loss. A popular hero of his day, Dewey was commissioned admiral of the Navy, a rank created for him, in March 1903.

Two previous ships have carried his name. The first was a destroyer that survived the attack on Pearl Harbor and went on to receive 13 battle stars for World War II service. This newest destroyer is the 55th of 62 Arleigh Burke class destroyers. It has a crew of about 360.
at 1/29/2008 12:44:00 PM