A Navy and Northrop Grumman team operated the aircraft from a ground control station at Edwards Air Force Base. The 29-minute flight was conducted at 5,000 ft. with landing gear down; the vehicle flew a racetrack pattern over the dry lakebed with standard-rate turns.

"The success of today's flight can be attributed to the hard work and dedication of our integrated government and industry team," Engdahl said.

The X-47B's maiden flight marks the start of a year-long, approximately 50-flight, envelope expansion test program at Edwards. The first of two aircraft will complete its initial testing in late 2011 and the second aircraft will begin testing shortly thereafter.

After completion of initial airworthiness testing in California, each aircraft will be transported to Patuxent River Naval Air Station, Md. for the remainder of the carrier demonstration program.

"We are breaking new ground by developing the first unmanned jet aircraft to take off and land aboard a flight deck," said Rear Adm. Bill Shannon, Program Executive Officer for Unmanned Aviation and Strike Weapons. "This demonstration program is intended to reduce risk for potential future unmanned systems operating in and around aircraft carriers." 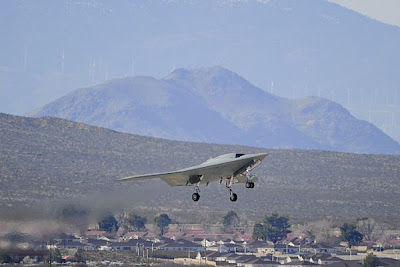