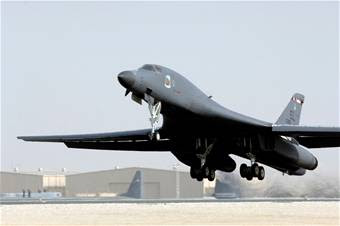 A B-1B Lancer lifts off from the runway of an air base in Southwest Asia. The B-1B is a multi-role, long-range bomber capable of flying intercontinental missions without refueling. It can perform a variety of missions, including that of carrying conventional weapons for theater operations. (U.S. Air Force photo/Staff Sgt. David Miller)

LANGLEY AIR FORCE BASE, Va. (AFPN) -- May 2 marks 20 years since the last B-1B Lancer was delivered to the Air Force, and today commanders consider it one of the most valuable aircraft in Iraq.

Since 2003, the once-nuclear-weapon-carrying bomber has maintained a continuous presence in Southwest Asia after the Air Force modified it to carry numerous conventional bombs.

The Lancer's efficiency in urban ground combat is peculiar considering its designers never envisioned it for such a job, said Lt. Col. James Johnson, Air Combat Command B-1 weapons system chief. The bomber, he said, was designed to make flights around the globe from four garrison bases to deliver nuclear ordnance. Now it's an inter-theater aircraft trading long-range sorties for loiter time in Iraqi air space.

"Upgrades enabled it to use smaller bombs and more of them," said Senior Master Sgt. Chuck Klein, Air Combat Command B-1 aircraft manager. "[The B-1] uses precision smart bombs to support troops in contact."

Operating at approximately 20,000 feet, the B-1 waits patiently with up to 35 tons of precision-guided bombs. When ground troops encounter the enemy it can engage in minutes because of its readiness and speed.

In the first six months of Operation Iraqi Freedom, the bomber delivered almost 40 percent of the bomb tonnage in only five percent of the sorties. Nearly five years later, the B-1 sorties increased by 25 percent, and Air Force officials dubbed it the most valuable aircraft for OIF in March 2007.

Other Air Force bombers have their advantage: the B-2 Spirit boasts stealth and the B-52 Stratofortress is low cost to operate.

But the B-1 earned its popularity by trumping those bombers in speed, range and payload, said Sergeant Klein. Those attributes are what make it a perfect fit for the war in Iraq.

"The airplane can do the job continuously and has the right mix of weapons," he said, adding that its long loiter time and massive payload make it a fast lifesaver for ground troops.

In fact, the B-1 is so effective there are times when it doesn't even need to drop a bomb.

Army officials from the 82nd Airborne 2nd Battalion 505th Parachute Infantry Regiment, who returned from Iraq in November, said a B-1 show of force was more than enough to put the enemy's head down during gun battles. A show of force occurs when an aircraft flies by low and fast releasing flares to intimidate enemy combatants. Smaller fighter aircraft are usually used for this purpose; however, the 200,000 pound Lancer makes for an intense fly-by, Army officials said.

Despite the B-1's age, its effectiveness in Iraq prompts the Air Force to keep a sharp technological edge on the Lancer. Upgrades to the B-1 are ongoing initiatives that modify the airframe with the latest technology, according to Colonel Johnson. Currently B-1s are being equipped with the Sniper Advanced Targeting Pod, which allows pilots to identify tactical targets at greater ranges.

Other accomplishments of the B-1 include the breaking of 51 world records. Sergeant Klein said many of these records include carrying large amounts of weight at fast speeds from one point to another.