C-130 unit gets a new bird with an old history 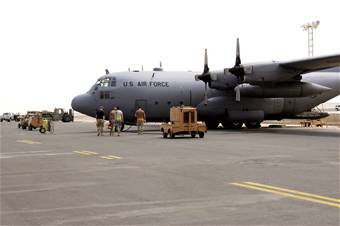 For years, U.S. Air Force, coalition and sister service forces have relied on the steady stream of supplies and equipment brought in by aircrews flying KC-135 Stratotankers, C-130 Hercules, C-17 Globemaster IIIs and other airlift workhorses. One airplane new to Southwest Asia carries something more: a rich history dating back more than 40 years.

Officials in the 746th Expeditionary Airlift Squadron recently added "Patches," a C-130E, tail no. 62-1817, into its fleet. The airplane arrived from Pope Air Force Base, N.C.

"She's a great lady," said Lt. Col. Daniel Tulley, 746th EAS commander. "I've seen a picture of her at Air Mobility Command headquarters at Scott Air Force Base, Ill., and it was interesting to read about her crew's contribution to history. I'm proud to have her on our ramp."

According to Alan Marsh, 379th Air Expeditionary Wing historian, the People's Army of Vietnam launched what became a 77-day battle at Khe Sanh on Jan. 21, 1968. During this time, overland supply routes to U.S. troops at Khe Sanh were cut off. Aircraft attempting to land were threatened by artillery fire from the North Vietnamese. Most resupply efforts attempted during this period were by air.

On Feb. 5, Patches and her crew flew into a storm of enemy fire to deliver much-needed supplies to the Marines besieged at the outpost. Lt. Col. Howard Dallman and his 345th Tactical Airlift Squadron crew loaded ammunition and a medical evacuation team at Da Nang and headed for Khe Sanh. Confronted with overcast weather and no communications with Khe Sanh, Colonel Dallman landed the C-130 under heavy enemy fire.

One shell hit the aircraft and ignited a fire, threatening the cargo boxes of ammo loaded in the plane. The crew stayed with the C-130 as it taxied down the runway. It continued taking additional hits by enemy fire, one of which blew out a tire. One engine quit when a mortar round exploded and threw dirt into it.

After the fire was extinguished, the valuable cargo was unloaded and the tire repaired, the C-130 crew took off, again sustaining hits from the enemy. Colonel Dallman received the Air Force Cross for his efforts to re-supply the Marines at Khe Sanh and all crew members received the Silver Star.

Decades later, tail no. 62-1817 is still bringing the fight to the enemy, this time in Southwest Asia.

"It gives our crewmembers and maintainers a sense of pride to know that one of their aircraft has been through something that significant," Colonel Tulley said. "It reflects on the entire Air Force fleet, and is a testimony to the maintainers and crew members who fly them that these planes are still around and parked next to the newer C-130Js, doing the same missions."

Tech. Sgt. Jeremy Seay, 746th Aircraft Maintenance Unit crew chief, has worked on "Patches" more than once, and said her history is what he finds most interesting about her.

"This is my third time deploying with her," he said. "It's great to be able to work on a 45-year-old aircraft with so much history."

He said it's especially meaningful because his father served in Vietnam.

At Pope AFB, his home station, Sergeant Seay enjoys maintaining all C-130 aircraft, but prefers to work on the older planes.

"I would rather work on E models (built in the early '60s) than the newer C-130Js (built in early 2000) because of their history and the significance of what they've done for our country," he said. "I've worked on many different variations of C-130s, from older Vietnam-era planes to ones that have seen recent campaigns such as the AC-130 gunships they have at Hurlbert Field, Fla., but I've got to say, 'Patches' is probably the most interesting of them all."

With the addition of another aircraft, the 746th EAS can continue to impact the mission here and make history for future generations.

"Mobility Airmen and the planes we fly often make the greatest impact with sustained performance over time," Colonel Tulley said. "It's when you look back at the results after a period of time you realize the profound impact. For example, every one of our 19,000 passengers airlifted has been spared the danger of traveling via ground convoy."
at 4/16/2008 07:46:00 AM