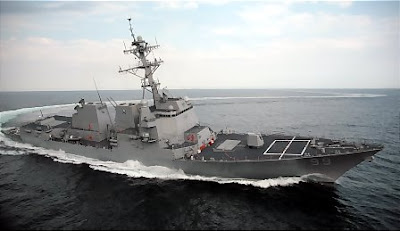 MAYPORT, Fla. (NNS) -- USS Farragut (DDG 99) and its Sailors deployed for the first time April 7 as part of the George Washington Strike Group in support of Partnership of the Americas (POA).

Commanded by Cmdr. Scott E. Dugan, this is Farragut's first deployment since the ship's commissioning May 4, 2006.

"Deploying is an important event in any service member's career, but there is a significant amount of pride associated with being the first crew to deploy a ship," Dugan said. "A successful deployment will be an excellent opportunity for Farragut to improve interoperability and readiness with our South American partners, essential elements of the Navy's new Maritime Strategy."

Apart from this being Farragut's first deployment, there are other factors which will make this experience truly unique.

As part of the strike group, Farragut will escort USS George Washington (CVN 73) (GW) during the first portion of its journey to Yokosuka, Japan where GW will replace the USS Kitty Hawk (CV 63) as the Navy's only permanently forward-deployed aircraft carrier.

The deployment includes bilateral and multinational sea-based exercises and training opportunities, such as UNITAS, which has two geographically-focused maritime exercises aimed at improving interoperability between participating navies.

As such, Farragut's air defense team will be actively engaged in managing all air contacts throughout the entirety of her transit with GW.

Similarly, the POA's mission presents its own unique challenges. Numerous community relations projects will take place during Farragut's port visits, involving a high level of operational support and management. Additionally, underway exercises will be conducted with the Argentine, Brazilian, Chilean, Panamanian, and Peruvian navies in order to improve interoperability with these nations as our partners in an effort to ensure maritime security throughout the region.

After Farragut detaches from escorting GW, its crew will engage in counter-narcotic and theater security cooperation exercises. Maritime interdiction operations scenarios were conducted during the recent group sail exercise in preparation for the types of situations Farragut's visit, board, search, and seizure team may encounter during deployment.

"If Farragut is around for 30 more years, you will always be able to say you were the first crew who took this ship through deployment for the very first time," said Dugan prior to the ship's first deployment. "No other crew can claim that. We are the fifth ship named Farragut; consequently, this crew has the opportunity to contribute towards a continuing naval tradition."
at 4/15/2008 07:41:00 AM