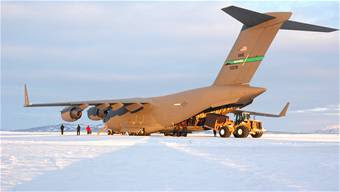 With only eight days remaining before Antarctica becomes shrouded in 24-hour darkness during winter, Airmen from the 446th and 62nd Airlift Wings brought 100 scientific researchers, support personnel and their equipment back to civilization. The mid-April flight is the closest to winter a Deep Freeze crew has ever landed in Antarctica.

Tasked to support the National Science Foundation's research efforts in Antarctica, the Reserve and active-duty Airmen from McChord typically provide C-17 Globemaster III support from August to March, which is summer in the southern hemisphere. However, a scientific research team from Montana State University required mission support later than usual this year.

The research team, studying light-driven life in Antarctica's permanently frozen lakes, had to push their field time as close to winter as possible in order to have the proper conditions for their experiments. Unable to receive support this late in the season from the New Zealand air force, the National Science Foundation called on the U.S. Air Force for help.

"We knew we could do it. It hasn't happened yet, but if we ever need to do contingency support -- even in the middle of winter -- we're ready to respond," said Lt. Col. James McGann, commander of the C-17 Deep Freeze operations and a member of the 62nd AW.

The research would be impossible to conduct without the Air Force's ability to respond this late in the season, according to MSU Professor John Priscu. "We wouldn't be here - that's all there is to it. It's a long way from here to New Zealand," he said. One of Antarctica's most weathered research scientists, Professor Priscu has spent 24 seasons on the ice and led this year's MSU team.

By pushing the season, Professor Priscu believes both the Air Force and his research team proved something: "It's proof of concept. We proved we can come down -- and the Air Force can, too -- and work right up to winter."

While most researchers return home after the summer season, a small support group stays behind at the NSF station to maintain and build infrastructure. In case something happens to the support personnel, Colonel McGann is training his crews to fly into the dark Antarctic winter using night vision goggles.

"We're ready if they need us. We've flown test flights under similar circumstances, and although we haven't flown into Antarctica using NVGs, I'm confident if the call comes, we can do it safely and expeditiously," he said.

Even without the difficulties inherent in using NVGs, Deep Freeze missions have more than their share of risks.

Landing on an ice runway in temperatures as frigid as -70 degrees Fahrenheit, Operation Deep Freeze is one of Air Mobility Command's most extreme missions. As such, Colonel McGann cherry-picks his crew, exploiting the expertise of both Reserve and active-duty Airmen from McChord AFB.

"Without a doubt, it's one of the most sought-after missions to get on in Air Mobility Command," said Maj. Tom Jenkins, deputy commander of the mission and a Reserve pilot from the 446th AW.

Fewer than 20 pilots in the entire command are certified to fly Deep Freeze missions, and the process takes three years to complete. Aside from landing on a giant sheet of ice, unpredictable weather makes Antarctica one of the most difficult places to fly into in the world.

"[The weather] can change in a second. Even on a sunny day, if that wind picks up, it blows the snow everywhere. On another mission I was on, you couldn't see more than 50 feet just from the wind blowing the snow around," said Maj. Chuck Corrigan, A Reserve pilot and one-of-two pilots who were certified on the mission.

The bitter temperatures have a profound affect as well on loadmasters and crew chiefs, who are forced to work in the elements. After cargo is loaded onto the C-17 using giant forklifts, loadmasters have to push the pallets into place by hand and secure them, all without any heat on the airplane.

If something breaks during flight and needs to be fixed after landing, crew chiefs have to respond to the situation, no matter how inhospitable the temperature is outside.

"The hardest part is working with your hands, because they get cold very fast. Fortunately, we didn't have any maintenance issues this time," Tech. Sgt. Michelle Short, a Deep Freeze crew chief from the 62nd Aircraft Maintenance Squadron.

At least for loadmasters, conditions have improved a bit over the years. Master Sgt. Terry Philon, a Reserve loadmaster from the 446th AW, has flown to Antarctica in both C-17s and its predecessor, the C-141 Starlifter. Sergeant Philon is one of the most experienced members of the crew, having just completed his 16th Deep Freeze trip since he began flying them in 1999.

"It's a world of difference between those two planes," he said. "In the (C-)141, it got cold and stayed cold. Since the ceiling wasn't as high (as the C-17), you had space limitations, too. The first time I flew, I configured the jet and realized that I was stuck in the back, with no way to get up front. Luckily, you don't have to worry about that with the C-17."

Another person thankful for the C-17's extended capabilities is Professor Priscu, who was able to avoid spending the winter in Antarctica thanks to the plane's increased cargo and passenger capacities.

"People were frothing at the mouth when we found out a C-17 was coming," he said. "Some of them have been here since last winter and they're starting to act a bit weird. They're definitely ready to get out."

Thanks to the expertise of Deep Freeze Reserve and active-duty Airmen, and the capabilities of the C-17, Professor Priscu and his crew were able to escape back to civilization before things got too weird.
at 4/20/2008 07:35:00 AM