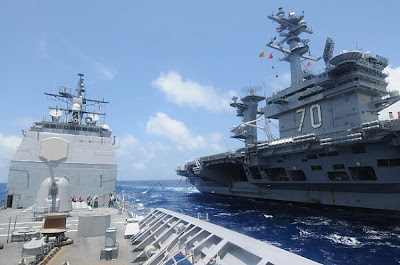 "South America is a hugely important part of the world and so it's very important that our Navy understand and appreciate the relationships, cultures and capabilities of our partner navies," said Rear Adm. Ted Branch, commander, Carrier Strike Group (CSG) 1. "So this gives us a great opportunity as a Navy to foster those relationships, improve our understanding and our cooperation and interoperability with partner navies in the region."

Carl Vinson's arrival follows a recent visit by Commander U.S. Naval Forces Southern Command Rear Adm. Victor Guillory during which he expressed appreciation for the outstanding support provided by the Brazilian Navy to the U.S. during its training periods and regional exercises. Branch went on to say these interactions only reinforce South American partnerships.

"When you visit other countries and you talk to the people, you interact with other people and places, my experience is you always come away with a real appreciation, a more in-depth knowledge of their culture and their identity, and there's always a greater a degree of understanding," said Branch. "That mutual understanding and respect gained through port visits and theater-security cooperation and interaction like that are always valuable to the whole world because it promotes understanding and fosters good relationships."

After more than three weeks at sea, the port call is the first occasion for Carl Vinson's crew to interact with locals and experience genuine South American culture.

"The crew has performed admirably," said Carl Vinson Commanding Officer Capt. Bruce H. Lindsey. "After their swift and remarkable response to Haiti and a brief visit in Mayport, Fla., this chance to experience Brazilian culture is exciting. The crew is taking advantage of our MWR (Morale, Welfare and Recreation) tours and is looking forward to the interaction."

Nearly all of the tours offered by the ship's Morale, Welfare and Recreation Department sold out three days prior to the port visit.

Carl Vinson will continue with Southern Seas 2010 and meet with more South American military and civilian representatives and take advantage of unique port calls as part of a scheduled homeport shift.
at 2/27/2010 07:50:00 AM