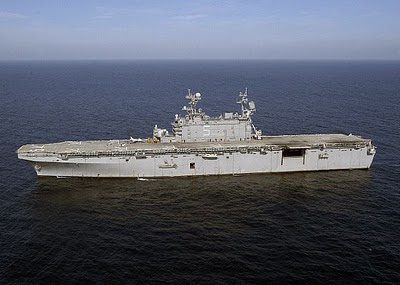 INSURV is a process established by Congress in 1868, to ensure ships in the Navy are properly equipped, reliable and mission ready.

The board is comprised of more than 80 high-ranking officers, civilians, and chiefs, each with a specific area of expertise to inspect and evaluate ships.

"For INSURV only being five days, it feels like an eternity," said Operations Specialist 2nd Class Lewis Botello, on day three.

Peleliu prepared for INSURV by conducting several mock inspections over several underway periods, which proved to be beneficial in her success.

"Practice makes perfect," said Lt. Cmdr. Robert Bulatao, Peleliu's Training Officer. "INSURV is packed with a number of events that require close coordination, and it's one thing to write it on paper, but to actually execute it, and come up with and practice certain contingencies was invaluable."

During the five days, inspectors scattered throughout the ship examining the ship's safety and habitability, and the capabilities of operations, damage control, supply and weapon systems.

"INSURV will teach anyone more about their job and work place," said Gunner's Mate 3rd Class Ryan Ramirez. "I learned more about our spaces and what they contain over the past couple weeks than I have my entire time onboard."

"Sailors from ER09 division understand the importance of their jobs and the impact it has on Peleliu's operational readiness," said Damage Controlman 2nd Class(SW) Carl Rosengreen, ER09's subject matter expert. "That one common goal results in a tremendous amount of pride in their responsibilities as well as themselves."

Pride in the ship was not one of Peleliu's shortcomings.

"This week was especially challenging, but I am very proud of our ability to overcome adversity," said Commanding Officer Capt. David A. Schnell. "The weeks leading up to, and including the week of, INSURV, this crew poured its heart into making sure we were as ready as possible."

Although Peleliu passed the inspection, the 30 year-old ship still has its deficiencies.

"We are directing our efforts to correct a number of discrepancies identified, whether they're material or administrative," said Bulatao. "That's where a lot of our focus has gone as we finished INSURV and approach deployment."

With INSURV behind, the operational tempo continues. She is currently underway off the coast of San Diego conducting Marine Corps AV-8B Harrier Deck Landing Qualifications in preparation for an upcoming deployment.
at 2/16/2010 07:00:00 AM