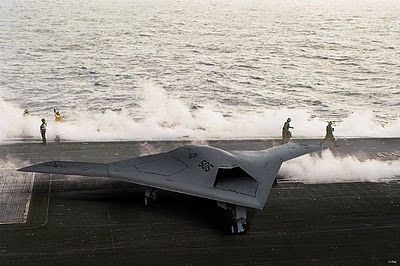 This effort will reduce program risk and is one of many steps toward the X-47B's first carrier arrested landing or "trap."

The X-47B will be the first unmanned jet aircraft to take off and land aboard an aircraft carrier. With a 62ft wingspan and length of 38ft, the X-47B is about 87 percent the size of the F/A-18C aircraft currently operating aboard Navy aircraft carriers.

Mark Pilling, a former naval flight officer with operational unmanned aircraft experience, is the team's mission operator. He and his team are charged with verifying mission operator software between the ship and aircraft.

"This is the first step in the X-47B's integration into the carrier's systems," said Pilling.

The team is testing X-47B software integration by using a King Air turbo prop "surrogate" aircraft taking off and landing from shore. As the aircraft approaches the carrier, it performs the same types of procedures as manned aircraft. However, since the X-47B is unmanned, digital messages from shipboard controllers will be used to control the aircraft instead of verbal instructions. In response to the digital command and control messages, the plane's software confirms, complies and sends a "wilco" signal back to the controllers and mission operator.

"Over the last two at sea periods on Lincoln, we have integrated into a number of the ship systems, from PriFly, to CATCC, to the LSO platform," said Pilling.

Janice Stolzy, the Northrop Grumman project lead, is on board to verify that the prototype equipment works in a real-time operational environment. Stolzy said successful UCAS-D system testing on Lincoln will set the stage for additional developmental testing later this year, including testing the software integration using an F/A-18 surrogate aircraft to more closely emulate the X-47B's flight path.

"This is an important milestone for the Navy and we're making great strides on board Lincoln," said Zander.

Additional UCAS-D development activities are underway at multiple NAVAIR and Northrop Grumman sites throughout the United States. First flight of the X-47B is expected later this year.
at 2/14/2010 06:28:00 AM