Mention the words "Monitoring the Military," and most radio hobbyists will immediately think of military air shows, sporting event Military Aircraft Flybys or a whole host of other military activities they would like to hear on their radios. There is a big radio frequency spectrum out there to monitor, and if you know where to listen, you can eavesdrop on some of the coolest radio communications you will ever hear on a scanner or shortwave radio. Military communications monitoring is the one segment of the radio hobby that has exploded in growth in recent years and is getting more popular among the listening community every day.


Larry Van Horn N5FPW, spent 15 years documenting activity in the military radio spectrum in his monthly Milcom column in the pages of Monitoring Times magazine. And now for the first time ever, he is publishing and making available all those columns here at Amazon in the Kindle E-Book format.

The Milcom Files edition one covers the 15 years of Military Communications (Milcom) columns that Larry wrote for the now defunct-Monitoring Times magazine from 1998-2013.

The MT Milcom columns documented the U.S. military conversion to narrowband LMR systems, the move from conventional to trunk radio systems, the 225-400 MHz band plan shift, including the new 380-400 MHz sub-band, and HF military frequencies, both foreign and US. This two-volume set of e-books has over 327,000 plus words, and nearly 1,000 pages of frequencies, call signs, and how-to style articles.

Even though these columns were originally published from 1998-2013, you will find a lot of material that is still valid even today. All US military services, HF. VHF. UHF, military satellites, FAA Air Route Traffic Control Center frequencies, base profiles, foreign military frequencies, airshow frequencies, equipment, and a lot more are included. Each column will be presented as it was published in MT in this e-book except for photographs.

If you are interested in monitoring the military, own a scanner and/or shortwave radio, then the Milcom Files two volume set is a must reference on your radio shack shelf.

The price for each e-Book edition is US$7.99. This book is being released internationally. Amazon customers in the United Kingdom, Germany, France Spain, Italy, Japan, India, Canada, Brazil, Mexico and Australia can order the e-Book from Amazon websites directly servicing these countries. All other countries can use the regular Amazon.com website.

You do not need to own a Kindle reader to read Amazon e-book publications. You can read any Kindle book with Amazon’s free reading apps. There are free Kindle reading apps for the Kindle Cloud Reader, Smartphones (iPhone, iTouch, Android, Windows Phone and Blackberry); computer platforms (Windows XP, Vista, 7 and 8 and Mac); Tablets (iPad, Android and Windows 8), and, of course, all the Kindle family of readers including the Kindle Fire series. A Kindle e-book allows you to buy your book once and read it anywhere. You can find additional details on these apps at this link on the Amazon website at www.amazon.com/gp/feature.html?ie=UTF8&docId=1000493771.

Information on other publications by the author is available on the author’s page at Amazon http://www.amazon.com/-/e/B00G1QMO4C. 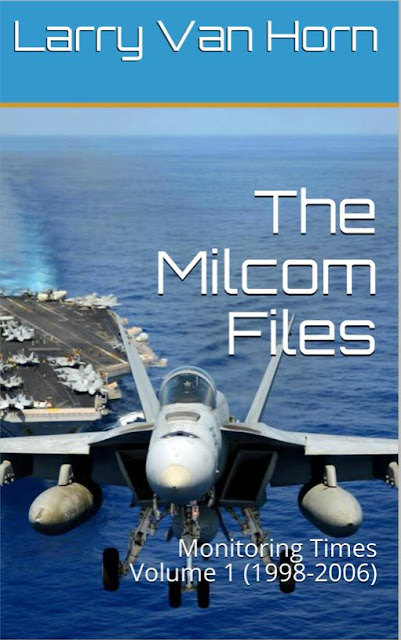 Milcom September 1998
Guide to Military Monitoring; Where do you hear the military?; Scanner Owners Can Get into the Act;  A True Milcom Story; Milcom Frequency Spotlight; And Finally, ...Table One: Major Military Communications Bands

Milcom March 2000
The 2000 Air Show Season Commences; Not Just Any Old Scanner Will Do; So where is the action?;
Table One: Military Demonstration Teams 2000 Performance Schedule

Milcom September 2001
A Gem of a Frequency; Maritime Patrol and Reconnaissance; The TSCs; A Sky Full of Aircraft Listening into the Background; Van Nuys Air Expo; Happy Hunter Revisited

Milcom November 2001
SCATANA and the 9/11 Attacks; Who is NORAD?; How do they do their job?; E 3 Airborne Warning and Control System (AWACS); Air Defense; NORAD’s Newest Mission – Counter Drug Surveillance; So on September 11th where did everyone go?; Table 1: NORAD Air Defense Frequencies

Milcom September 2004
Is the HFGCS network switching to digital voice?; What exactly is HFGCS?; There is more than one HF mission here!; This is Not Your Grandfather's HF!; AWACS aircraft first on HF for e-mail; But Will HFGCS Switch to Digital Voice?; Eglin AFB Trunk System LMR Update; Table One: High Frequency Global Communications System 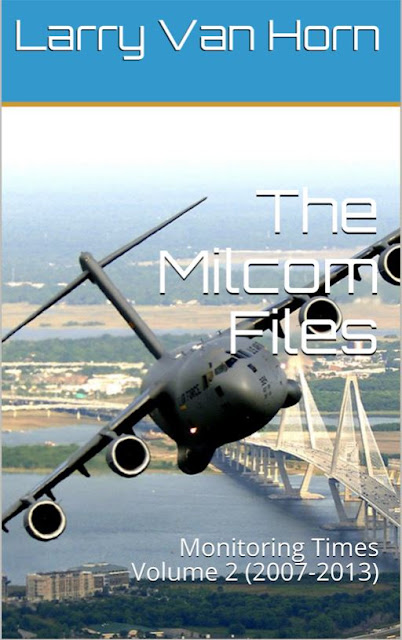 Milcom November 2008
Monitoring the Feds During a Crisis; COTHEN

Milcom December 2009
November-Foxtrot-India-India-Four-Sierra; So what is an EAM really?; The Navy and EAMs; The Definitive Word?; So how do they disseminate EAMs?; Things may not stay the same; Where to Hear an EAM; Milcom Resource Guide

Milcom September 2011
Monitoring the Military on COTHEN; COTHEN Frequencies Continue to Increase; Who are the COTHEN Military Players?; Table One: Coast Guard Assets on COTHEN; Table Two: US Army Corp of Engineers

Milcom December 2011
Is the HF Radio Spectrum Really Dead or . . .; So What is the Real Problem?; A Special Radio Frequency List for the Holidays; Table One: US Government/Military HF Frequencies

Milcom May 2013
Monitoring the Busiest Air Station in the Marine Corps; A busy base equals busy frequencies and lots of them; 3rd Marine Air Wing; FAA/DoD NOTAM Frequency Changes

Milcom November 2013
Monitoring the Customs COTHEN HF Network; COTHEN Today; COTHEN Frequencies Continue to Increase; Who are the COTHEN Military Players?; The Future of COTHEN and the Coast Guard; Table One: Coast Guard Assets on COTHEN

Milcom December 2013
My Finale is Where I Started; US Military UHF Satellite History; What’s in Orbit Today; Farewell to MT, but I will still be around.; Table One: MT Milcom Military Communication Geostationary Satellites