It has emerged that the UK plans to sail HMS Queen Elizabeth to the Pacific in 2021 amid concerns regarding freedom of navigation in the region as China ramps-up its defense spending.
HMS Queen Elizabeth will sail to the Pacific on her maiden deployment in 2021 according to an ambassador.
Kim Darroch, Britain’s ambassador to the US said at a think-tank event in Washington:
“As we bring our two new aircraft carriers on-stream in 2020, and as we renew and update our defense forces, they will be seen in the Pacific.”
And we absolutely share the objective of this US administration, and the next one, to protect freedom of navigation and to keep sea routes and air routes open.”
Currently, on sea trials, HMS Queen Elizabeth is due to be handed over to the Royal Navy by the end of the year.
Former First Sea Lord George Zambellas said:
“When the first of our new carriers, HMS Queen Elizabeth, deploys on her first mission in a few years, with fifth-generation fighters and drones embarked, she will scotch at a stroke any talk of Britain’s retreat from the world.”
The Queen Elizabeth class carriers are the largest and most powerful warships ever constructed for the Royal Navy, but what will they carry?
The term now used for the carriers embarked squadrons is ‘Carrier Air Wing’ (CVW), the previously used Tailored Air Group (TAG) has fallen out of official use. The vessels are capable of deploying a variety of aircraft in large numbers, up to a maximum in the upper fifties in surge conditions.
Captain Jerry Kyd, commander of HMS Queen Elizabeth, commented on the initial deployment and the gradual increase in air wing numbers:
“We are constrained by the F-35 buy rate even though that was accelerated in SDSR in 2015, so initial operating capability numbers in 2020 are going to be very modest indeed.
We will flesh it out with helicopters, and a lot depends on how many USMC F-35s come on our first deployment in 2021. But by 2023, we are committed to 24 UK jets onboard, and after that it’s too far away to say.”
In addition to the joint force of Royal Air Force and Royal Navy F-35Bs and their pilots, the air wing is expected to be composed of a ‘Maritime Force Protection’ package of nine anti-submarine Merlin HM2 and four or five Merlin for airborne early warning; alternatively a ‘Littoral Manoeuvre’ package could include a mix of RAF Chinooks, Army Apaches, Merlin HC4 and Wildcat HM2. We understand that vessel would still carry at least one F-35 squadron aboard in such circumstances to offer air defense as well as support to the helicopter assault activities.
Recently, the Ministry of Defence confirmed plans for the deployment of American F-35 aircraft alongside British jets aboard HMS Queen Elizabeth.
The addition of US Marine Corps aircraft will see HMS Queen Elizabeth sail with 24 or so F-35Bs in addition to around 14 or so helicopters for her maiden deployment. It is understood that the US aircraft will augment British jets on coalition operations.
The Queen Elizabeth class mark a change from expressing carrier power in terms of the number of aircraft carried, to the number of sortie’s that can be generated from the deck. The class is not the largest class of carrier in the world but they are most likely the smallest and least expensive carrier the Royal Navy could build which still have the advantages that large carriers offer. 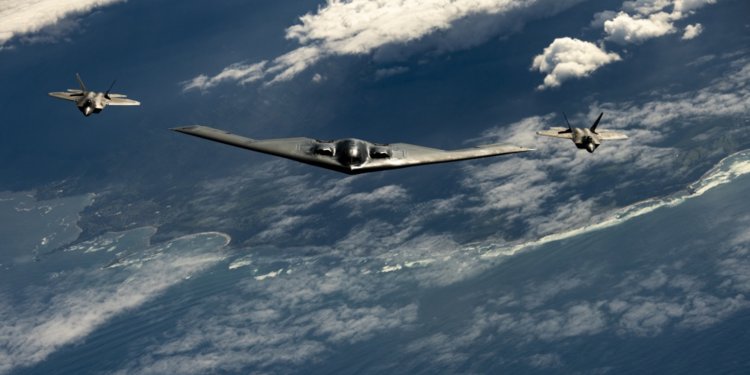 The B-2 Spirit, a heavy bomber, and the F-22 Raptor, an unmatched air-superiority fighter, are stealth aircraft capable of slipping past enemy defenses to unleash a significant amount of firepower on enemy targets.

These two hard-hitting aircraft are training together in the Pacific, where China has sought to bolster its anti-access, area-denial capabilities to deter the US military.

The deployment to Hawaii is intended to reassure America's international partners while sending a warning to adversaries that "the B-2 is on watch 24 hours a day, seven days a week ready to protect our country and its allies."

Fascinating article on US Air Force B2A bombers and F-22 Fighters sending a message to the Chinese Military.

Two strategic missile carriers Tu-160 performed a planned flight in airspace over the neutral waters of the Arctic Ocean, the Barents, Laptev and Kara seas.

The flight duration was more than 15 hours. During the flight, the crews of the Tu-160 worked refueling in the air.

Long-range aviation pilots regularly fly over the neutral waters of the Arctic, North Atlantic, Black
and Caspian Seas, and the Pacific Ocean.

All flights of the airplanes of the Air and Space Forces of Russia are carried out in strict accordance with the International Rules for the Use of Airspace.

158th Fighter Wing Air National Guard officials have announced that the last of the Vermont Air Guard’s F-16s will depart the base in April. Colonel David Smith says the F-16s 32-year history in Vermont ANG will end in April 2019.

WCAX-TV Channel 3 in South Burlington reports at that point, the last of the Guard's planes will move to another Air Guard base. The first of the F-16s arrived at the base back in 1986. Smith says planes have been slowly sent away from the base over the past 12 months, and the Guard is working on a celebration for the F-16 send-off in April. Officials say the base is preparing for the arrival of F-35s in September.
at 1/28/2019 07:02:00 AM 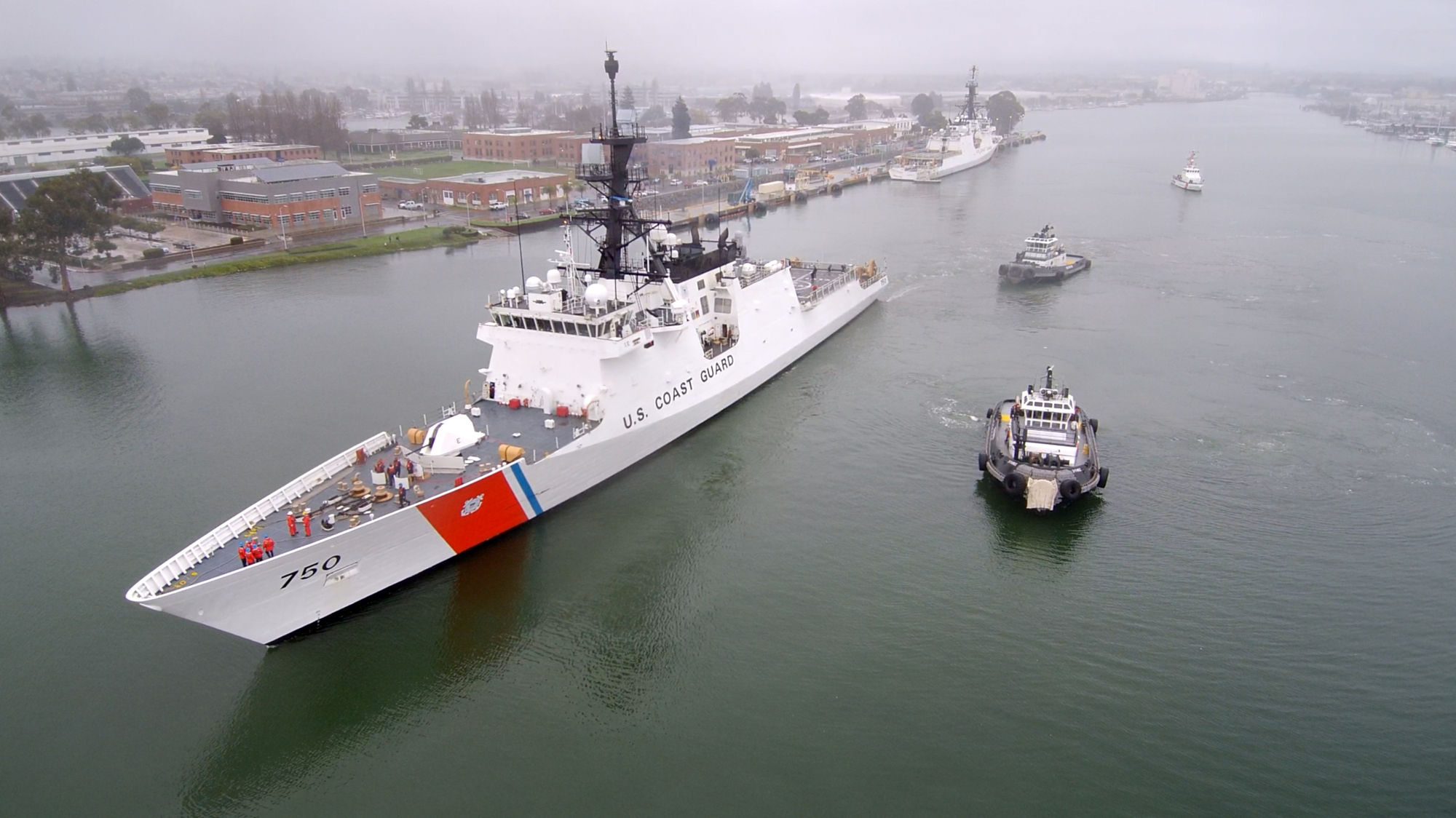 On a gray and foggy morning, tears intermingled with rain as family members braved the elements to say goodbye to the 170 crewmembers of Coast Guard Cutter Bertholf (WMSL-750), a 418-foot national security cutter, which departed Alameda, California, Sunday for a patrol in the Western Pacific Ocean.
The U.S. Coast Guard has an enduring role in the Indo-Pacific going back over 150 years. The service’s ongoing deployment of resources to the region directly supports U.S. foreign policy and national security objectives in the Indo-Pacific Strategy and the National Security Strategy.

“The United States is a Pacific nation,” said Vice Adm. Linda Fagan, commander Coast Guard Pacific Area, who was present to see the cutter depart. “We have deep and long-standing ties with our partners in the region, and more importantly, we share a strong commitment to a free and open Indo-Pacific, governed by a rules-based international system that promotes peace, security, prosperity and sovereignty of all nations.”

Bertholf will be operating in support of United States Indo-Pacific Command, which oversees military operations in the region. As part of its planned operations, the cutter will engage in professional exchanges and capacity building with partner nations.

As both a federal law enforcement agency and an armed force, the Coast Guard is uniquely positioned to conduct defense operations in support of Combatant Commanders on all seven continents. The service routinely provides forces in joint military operations worldwide, including the deployment of cutters, boats, aircraft and deployable specialized forces.

“I’m excited to see Bertholf sail today to the Indo-Pacific region of operations,” said Fagan, who described the cutter as one of the most capable in the Coast Guard fleet.

“They will be serving alongside other DoD military forces, particularly the U.S. Navy, and I know they will contribute key capabilities to that mission set. This crew has worked incredibly hard to get ready for today’s sailing, and I can’t think of a better ship and crew to be sending to the Indo-Pacific.”

Commissioned in 2008, Bertholf is the first of the Coast Guard’s legend class national security cutters. These advanced ships are 418-feet long, 54-feet wide, and have a 4,600 long-ton displacement. They have a top speed in excess of 28 knots, a range of 12,000 nautical miles, endurance of up to 90 days and can hold a crew of up to 170.

The cutter is named for Coast Guard legend Ellsworth P. Bertholf, who served as captain of the Revenue Cutter Bear during the famous Overland Relief Expedition, earning the Congressional Gold Medal. As the Coast Guard’s fourth commandant, Bertholf oversaw the transfer of the Coast Guard into the Department of the Navy during World War I and advocated for the successful postwar reconstitution of the service.

"The U.S. Coast Guard's unique authorities, capabilities, and missions make us the maritime safety and security partner of choice for sea-going countries around the world,” said Capt. John Driscoll, Bertholf’s commanding officer. “Our increased presence throughout the Indo-Pacific will enhance regional stability and improve maritime governance and security.”
In an address to the families and crew before the cutter set sail, Driscoll emphasized how critical family support is to crew wellbeing and readiness.

“Support from our families, wherever they live, is vital to ensuring we are ready to sail and answer the demands of our nation,” Driscoll said. “We must ensure our families are ready to weather the storm at home. We operate in a dangerous and high-consequence environment, and your ability to focus on mission can become easily compromised if you are worried about family.”

Fagan acknowledged the current lapse in appropriations and government shutdown has added stress and feelings of uncertainty to the typical emotions that surround a cutter departure.
“I know it is hard for these crews to be leaving behind their dependents and spouses – it’s a thousand times more so when everyone is wondering when our next paycheck will be, and how they can support the family they are leaving behind,” Fagan said.
“There has been an incredible outpouring of support for the families here in the Alameda area, but the tension and the anxiety for the crew is real," said Fagan. "We are standing by to help support those families who are left behind the same way that we are going to support the crew as they sail for the Western Pacific.”