After a brief absence from the radio hobby press, I have resumed my publication of military communication information, frequencies and call signs in my new Milcom column in The Spectrum Monitor e-Zine. 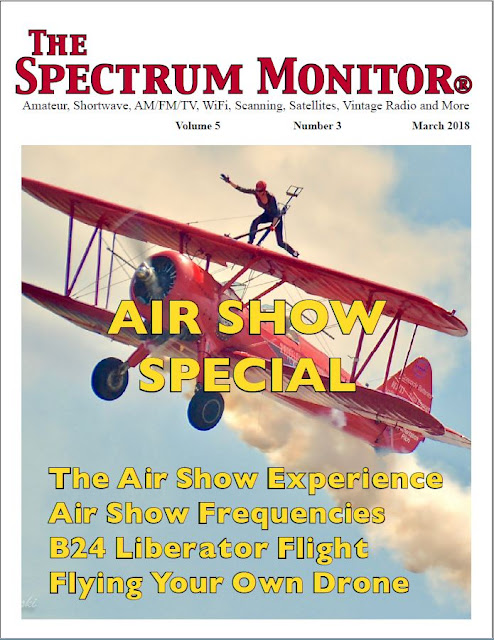 As a service to my readers, the list below is a complete index to every column I have written in TSM to date. You can order individual issues of TSM from the magazine's website at https://www.thespectrummonitor.com/. Individual issues are available for purchase at $3.00 each.

For those of you looking for my annual air show guide, you will find it available in the March issue of The Spectrum Monitor. That article is now available on the TSM website.


October 2017  What equipment do you need to monitor the HF Mil Comms?: Receiving Hardware, What’s for sale in the marketplace, The Used Receiver Market, The Digital Revolution, Milcom Tip of the Month: Don’t be afraid to throw away old frequencies

Oct 2018 Monitoring the U.S. Coast and the COTHEN HF Radio Network, Milcom Monitoring Tip of the Month: Keep a close watch on 255.400 MHz.

Jul 2019 Monitoring the Air Route Traffic Control Centers, How does an ARTCC work? pecial Use Airspace, Atlanta ARTCC Sectors/Frequencies, The Special Use Frequencies – An Update, Milcom Monitoring Tip of the Month: Be sure to monitor the ARTCC RCAG BUECs.

Aug 2019 New way to monitoring the military on January 1, 2020, Why is the FAA moving the ADS-B? So, what does that mean for the milcom monitor? ADS-B News, USAF Research Labs HF ALE Systems, High-Flyer Freqs Still in Use, Milcom Monitoring Tip of the Month: EAMs