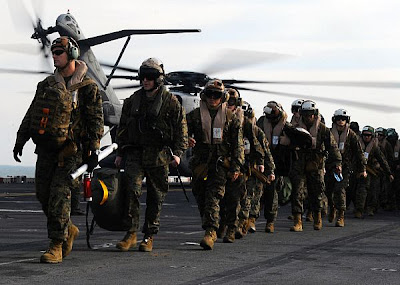 "Completing a successful deployment and bringing all of the Sailors and Marines safely back home to their families accomplished one of my major goals," said Capt. Paul McElroy, commander of the Bataan ARG. "The support of our families is the foundation that has carried us through these seven challenging months, so it's great to reunite with them before the holidays."

"It's hard being out at sea for such a long time, but my wife has been the core of my support," said Information Systems Technician 1st Class Michael Spicer, from Virginia Beach, Va. "She has handled all of the responsibilities I had at home and has done an exceptional job."

The Bataan ARG began its deployment May 13 with a primary mission of conducting maritime security operations in the U.S. 5th and 6th Fleet areas of responsibility while the 22nd Marine Expeditionary Unit (MEU), embarked on the ARG ships, served as the theater reserve force. They also engaged in seven theater security cooperation engagements and exercises, including Bright Star 2009, 5th Fleet's largest multinational exercise.

"Every mission, every exercise and every port visit conducted by these Sailors and Marines made a lasting impact throughout the maritime domain," said Bataan's commanding officer, Capt. Sam Howard. "I'm extremely proud of their performance, professionalism and accomplishments."

The Bataan ARG and 22nd MEU was the first ARG/MEU to deploy with the MV-22B Osprey, a tiltrotor aircraft with the ability to fly and hover like a helicopter or tilt its wing-mounted propellers forward to fly like an airplane. Bataan launched 10 MV-22B Ospreys from Marine Medium Tiltrotor Squadron 263 (Reinforced), 22nd MEU, to fly into Camp Bastion, Afghanistan, Nov. 6, marking the first time the aircraft were used in support of Operation Enduring Freedom.

The Bataan ARG/22nd MEU also had the opportunity to host several distinguished visitors while they were deployed, including the 75th secretary of the Navy, Raymond Maybus, who visited Fort McHenry and Bataan, and the Chief of Naval Operations Adm. Gary Roughead, who attended a reception held in his honor aboard Ponce.