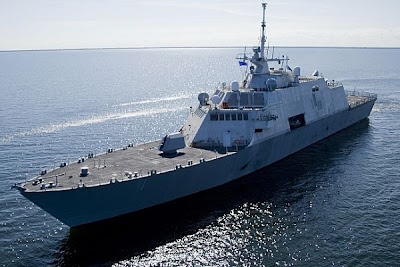 Freedom conducted independent ship deployment training and certification at sea from Nov. 13-21, operating with ships from the USS Dwight D. Eisenhower (CVN 69) Carrier Strike Group during their Composite Training Unit Exercise (COMPTUEX) off the southeastern coast of the United States.

Freedom conducted effective complex training as part of the Maritime Security Surge certification for the ship's Gold Crew, which will deploy aboard Freedom in early 2010 to U.S. Southern Command.

Freedom's path to deployment has been unique and challenging. As with every lead ship of a class, the operational testing and validation of the ship's sensors and weapon systems is a complex and time-consuming series of events that are normally conducted sequentially over an extended time period.

The Navy expects to learn key operational lessons about Freedom in a deployment setting and to integrate those lessons into the larger LCS fleet integration process. To achieve this goal, the Navy modified the typical workup schedule to accelerate Freedom's deployment by approximately two years. The Fleet Response Training Plan, used to evaluate a ship's operational capabilities as well as maintenance, testing and training, was modified to ensure effective training for this unique and highly capable ship with reduced manning and two crews.

In the past, test events were rigidly structured and scripted to validate system performance. As much as possible, these were modified to simultaneously fulfill operational training requirements with no compromise to performance standards.

"Because of the LCS multi-crewing concept, two core crews needed to be trained and assessed aboard Freedom, and that added another new dimension to our standard surface ship training and certification plan," said Capt. Michael Taylor, commander, LCSRON. "During testing and much of the unit level training, both the 'on-hull' crew and some members of the 'off-hull' crew were on board, and that gave both crews a chance to gain experience and proficiency on Freedom's systems."

During most of the Integrated/Advanced Phase Training and Assessment, only a single core crew and embarked detachments could be evaluated at one time across the range of military operations. The primary focus was on the Gold Crew, which will deploy with the ship for the first portion of the deployment.

After avoiding heavy weather off the East Coast, Freedom departed Mayport, Fla., Nov. 13 with the Blue Crew and Cmdr. Kristy Doyle, the Blue Crew commanding officer. During the three days that followed, CSFTL assessors put the crew through an intensive series of underway scenarios designed to evaluate their ability to execute maritime security missions both as an independent unit and as part of a larger force.

Freedom returned to Naval Station Mayport for a "hot swap" between the Blue Crew and the Gold Crew. The Gold Crew Commanding Officer Cmdr. Randy Garner and his crew then headed back out to sea, this time for five days of integrated training. Despite not having been on the ship for several months, the Gold Crew quickly settled in and successfully completed its training regimen.

"The opportunity to participate in COMPTUEX gave an unprecedented opportunity for my crew to operate with each of the components needed to bring Freedom to full operational capacity – mission module, aviation detachment and core crew," said Garner. "Never before had Freedom's Gold Crew operated with all of these elements at sea. The proficiency gained and the lessons learned were invaluable. I think we have another success to indicate that LCS will be a valuable asset to our operational fleet. We are looking forward to our deployment early next year."

LCSs like Freedom are designed to handle mission sets that do not require the full breadth and depth of capabilities of a traditional surface combatant. Instead of the wide spectrum of combat capability inherent to those platforms, LCS embarks tailored mission packages (surface warfare, mine countermeasure, anti-submarine warfare or maritime security) and an aviation detachment to fulfill a specific mission set. The tailored packages allow LCS to fulfill several niche missions with a much smaller crew and at less cost than larger surface combatants. In addition, the shallower draft of the LCS allows it to operate in many areas where larger, deeper draft combatants cannot venture.

Freedom will conduct additional system testing and training before it heads into its final Integrated/Advanced Phase training with the U.S. Coast Guard in January 2010. Freedom is scheduled to deploy to U.S. Southern Command and U.S. Pacific Command regions beginning in early 2010.
at 12/07/2009 06:51:00 AM