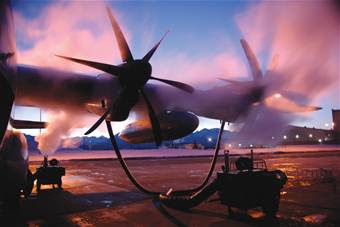 Flightline personnel ensure a WC-130J is prepared to fly a winter storm mission by de-icing the aircraft.

12/21/2009 - KEESLER AIR FORCE BASE, Miss. (AFNS) -- Members of the 53rd Weather Reconnaissance Squadron here have been tasked by National Weather Service officials to fly their first winter storm of the season on the East Coast starting Dec. 25.

Between hurricane seasons, the Hurricane Hunters have a lesser known, but equally important role: collecting weather data during winter storms.

"Whenever there's a system track that will cause an impact, there's potential for winter storms," said Lt. Col. Jon Talbot, a 53rd WRS aerial reconnaissance weather officer since 1992.

"Winter storms have a lot of impact," he said, detailing the emergency services and salt trucks that are used once the threat of a winter storm has been confirmed.

The Hurricane Hunters have two winter storm missions, Colonel Talbot said. The first is the Pacific mission. "We average 20 missions over 30 days when we deploy our airplanes to either Alaska or Hawaii." The second is flying winter storms locally in the Gulf of Mexico and in the Atlantic Ocean.

"The goal is to improve the weather forecast for the East Coast because we have a lot of people and money tied up in the Washington to Boston corridor," Colonel Talbot said.

The return of investment for flying winter storms and collecting data is an estimated 15 percent greater accuracy in weather forecasting.

"There are some 5,000 salt trucks in New York City alone," Colonel Talbot said. The increase in forecasting accuracy directly impacts emergency management capabilities by reducing the unnecessary dispatch of resources, which can be costly.

"If you collect the right information at the right place -- over the Pacific Ocean -- you can make a big impact to the forecast four to five days later," Colonel Talbot said. The idea is to fly winter storms before they happen to make the forecast better for the entire Northeastern community.

The Hurricane Hunters fly WC-130Js at high altitudes, typically 5 to 10,000 feet above their normal range, and drop small weather canisters, or dropsondes, designed to collect weather data in key locations of high-weather activity.

Weather information collected from the dropsondes is then transmitted to the National Weather Service and is ultimately used by forecasters to assess weather patterns enabling them to forecast more accurately.

In a storm, data is transmitted to the National Weather Agency and is later passed on to the Air Force Weather Network, Colonel Talbot said.

"When you fly a hurricane mission, you know you're making a difference," Colonel Talbot said. "With this mission, we know there are people waiting for the information we give to make the best possible forecast. It's essentially the same thing (as a hurricane mission)."

To Colonel Talbot, a 24-year veteran to the weather field, the experience is as rewarding as it is beneficial.

"What other meteorologists get to fly? You get the best of both worlds." he said.

To the people waiting for the forecast, the information he collects can mean the difference between spending hundreds of thousands in preparing for the weather rather than millions of dollars reacting to it.
at 12/22/2009 08:19:00 AM