X-51A WaveRider gets first ride aboard B-52 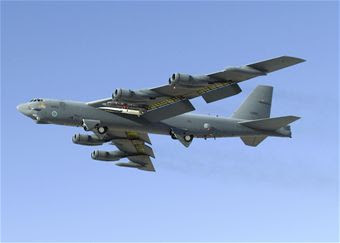 WRIGHT-PATTERSON AIR FORCE BASE, Ohio (AFNS) -- The X-51A Waverider was carried aloft for the first time Dec. 9 by an Air Force Flight Test Center B-52 Stratofortress
over Edwards Air Force Base, Calif.

The test was a key milestone in preparation for the X-51 to light its supersonic combustion ramjet engine and propel the WaverRider at hypersonic speed for about five minutes, before plunging into the Pacific Ocean.

"This was a great day for the program," said Charlie Brink, X-51A program manager with the Air Force Research Laboratory at Wright-Patterson AFB, Ohio. "The early look is we successfully captured all of our test points without any anomalies. I'm really proud of the AFRL, Air Force Flight Test Center, and Boeing/Pratt Whitney Rocketdyne teams' efforts to move us toward the big event. That flight test is currently planned in about two months, he said.

The Dec. 9 test, reminiscent of the early days of the historic X-15 program 50 years earlier, was conducted entirely in the airspace over Edwards AFB while various systems and telemetry were checked out. The Flight duration was 1.4 hours.

"After takeoff we climbed to 50,000 feet and verified B-52 aircraft performance, handling qualities with the X-51A attached to the B-52, control room displays and software integration with the X-51A," said Lt. Col. Daniel Millman, a B-52 project pilot. "The B-52 handled great and the flight preceded as planned."

The next B-52/X-51 flight test mission is expected in mid-January, and will be a full dress rehearsal, for its first hypersonic test flight, now planned for mid-February, Mr. Brink said. The dress rehearsal flight will depart Edwards AFB and head out over the Pacific to Point Mugu Naval Air Warfare Center Sea Range. Both airborne and multiple ground test assets will monitor all X-51A systems, but it will not be released from the B-52 and its engine will not ignite.

In February, the Air Force Flight Test Center's B-52 will carry the unmanned X-51A to approximately 50,000 feet over the Pacific Ocean then release it. A solid rocket booster from an Army Tactical Missile System will then ignite and accelerate the X-51 to about Mach 4.5. Then the booster will be jettisoned and the X-51A's supersonic combustion ramjet propulsion system will ignite and operate for about 300 seconds, propelling the cruiser to more than six times the speed of sound.

Onboard sensors will transmit data to ground systems before the cruiser plunges into the Pacific. There are no plans to recover it.

Four X-51A cruisers have been built and were developed by officials from the Air Force, Defense Advanced Research Projects Agency, Pratt & Whitney Rocketdyne and Boeing.

Pratt & Whitney Rocketdyne built the X-51's scramjet engine, which is the heart of the system. Engineers expect a great deal will be learned about hypersonic flight during the nearly 300 seconds under scramjet power. The longest-ever previous scramjet test, lasted only about 10 seconds, Mr. Brink said.

As the engine ignites it will initially burn a mix of ethylene and JP-7 fuel before switching exclusively to JP-7. The X-51's fuel-cooled engine design will both heat the JP-7 to an optimum combustion temperature and help the engine itself endure extremely high operating temperatures during the long burn.

"We're elated with the success of the captive carry and looking forward to our powered flight tests. The captive carry test was the culmination of many months of hard work by the X-51A team to verify that hardware, electrical and software integration was complete," said Joseph Vogel, a Boeing Phantom Works X-51A program manager.

Mr. Vogel called the mission an essential step to ready for the dress rehearsal, where the team will run through the processes of a complete mission profile in final preparation for the X-51's first powered flight early next year.

Previous important ground tests verified the X-51 and B-52 could communicate electronically and that X-51A can be safely and successfully uploaded and downloaded on the modified B-52H pylon. Wind tunnel tests and modeling to ensure safe separation from the aircraft were other prerequisites.

Program officials said the scramjet motor's great advantage is the ability to capture and burn oxygen in the thin atmosphere, rather than having to carry it in a large tank like the space shuttle or other rockets. Not having to carry the oxidizer needed for combustion means more payload capability.

Beyond scalable scramjet propulsion, other key technologies that will be demonstrated by the X-51A include thermal protection systems materials, airframe and engine integration, and high-speed stability and control.

Boeing officials said they also had to demonstrate the X-51A 's compatibility with the electromagnetic environment of the B-52H aircraft. The test verified that the X-51A can be powered by and communicate with the B-52H using a modified Joint Direct Attack Munition interface.

Mr. Brink said he believes the X-51A program will provide knowledge required to develop the game changing technologies needed for future access to space and hypersonic weapon applications.
at 12/12/2009 06:18:00 AM