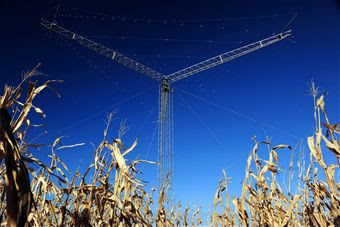 One of eight directional rotatable log periodic antennas stands tall behind a cornfield, Nov. 5, 2009, near Elkhorn, Neb. The directional rotatable log periodic antennas can rotate 360 degrees. A crew of telecommunications specialists maintained by the 55th Strategic Communications Squadron from Offutt Air Force Base, Neb., monitor the antennas, which support a wide variety of missions from executive levels of government to NASA. (U.S. Air Force photo/Josh Plueger)

OFFUTT AIR FORCE BASE, Neb. (AFNS) -- Although it's location in the middle of a cornfield on a quiet country road may seem cutoff from society, in reality the Elkhorn Communication Site reaches beyond almost every border -- worldwide.

Situated 35 miles northwest of Offutt Air Force Base, this 50-year-old rural communications site is one of the 13 stations around the world that comprise the High Frequency Global Communication System. Together, the sites provide the Air Force and the Department of Defense with rapid, reliable, two-way communications every day of the year.

"A lot of people don't even know we're out here," said Brady Bach, a telecommunications specialist with the 55th Strategic Communications Squadron. "Even members of the communications squadron on base have no idea where we're located a lot of the time." 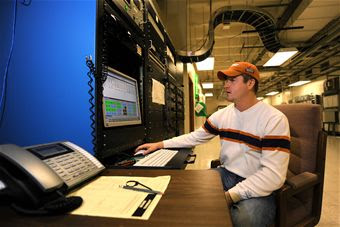 But while their location may be at times a mystery, their mission certainly is not. The HFGCS serves as one of the main communications systems for many U.S. government agencies. This includes the Joint Chiefs of Staff, U.S. Central, Pacific and Strategic Commands, and U.S. State Department as well as the president.

"When the president is in the air, he has 24/7 communication thanks to our system," said Dave Clingerman, site chief and telecommunications specialist with the 55th SCS. "HF is one of the most reliable communications going."

In addition to its usual global customers, the HFGCS recently went out of this world to provide communication support to NASA as it worked to get astronauts safely back to earth following a trip to the international space station.

"I am amazed as to the number of agencies that use our system on a daily basis and more are added yearly," said Duane Swigert, a telecommunications specialist with the 55th SCS. "If only we had the time to just sit there and listen to those conversations -- that would be exciting."

Each HFGCS site around the globe has control of 6,000 square miles of coverage. But when a station is having technical difficulties or is down for maintenance, the other sites have the ability to step in and assist until it's fully operational again. And with the Elkhorn Communications Site being located in the central part of the United States, it is called upon frequently because of its flexibility.

"Sitting right here, we can support either coast," Mr. Clingerman said. "It's truly seamless to our customers."

"They want as little interference as possible, which is why we're out here (in the country)," Mr. Clingerman said. "The receiver site is in Scribner because we don't want transmitters right next to them. The system puts out 4,000 watts, so you don't want that transmitting right on the front end of a receiver."

While the site is now maintained by a small staff of four, it was at one time a bustling hub of activity with more than 100 Airmen performing the mission.

"Technology was a big part (of the downsizing) as was budget cuts," Mr. Swigert said.

"The old equipment required a lot more people to maintain it, so what used to take a lot of bodies to perform the mission now only takes four," said Mr. Clingerman.

However, with the small staff, the mission doesn't suffer. With their diverse communications backgrounds these four can easily handle the system and its four technologies: radio, telephone, networking and tech control.

"We've got a bunch of experience and we're a very cohesive team here," Mr. Bach said. "We all have our strengths and we're all fully qualified to perform the mission."

"Diversity (in experience and knowledge) here is the key reason we are able to keep this system running at a nearly 100 percent operational status year round," Mr. Swigert said. "We each bring something important to the table that makes things work smoothly, like a well oiled machine, as they say."

While the system plays an important role in communications for organizations and personnel around the world, it has yet to reach its maximum capability. In the future, the Elkhorn Communications Site may see digital HF, airborne networking as well as possibly integrating with the Joint Tactical Radio System.

"When other satellites go out, HF is always around," Mr. Clingerman said. "More users are coming on board with our system, people are starting to realize what it can do and it's a technology that isn't going to go away."

So while this unit may be out of mind and out of sight for the most part, there's no doubt about its contribution to the mission.

"I have had folks tell me that this place is the Air Force's best kept secret," Mr. Swigert said, "and I would have to agree." 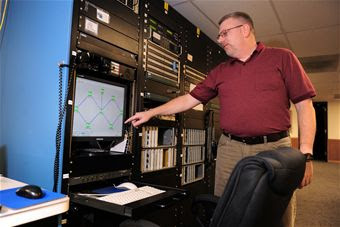 Dave Clingerman explains how he monitors antennas for the Elkhorn and Scribner Communication Sites Nov. 5, 2009, from a detached facility located near Elkhorn, Neb. Mr. Clingerman is a telecommunications specialist with the 55th Strategic Communications Squadron from Offutt Air Force Base, Neb. (U.S. Air Force photo/Josh Plueger)
at 12/05/2009 10:24:00 AM