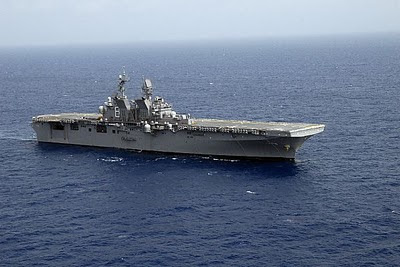 "This was the ship's initial CSSQT evolution, testing all Combat Systems weapon systems against multiple targets," said Chief Fire Controlman (SW) Russell Seymour. "The CSSQT tests us on watch-standing proficiency and technician's ability to maintain and operate their systems. The event is evaluated and assisted by an outside entity, which is preparing us for the near future when we will conduct missile firings entirely by ship's force."

C5 Department's CF Division began preparing for CSSQT soon after the ship arrived in San Diego Sept. 14. This included upload/download, dud/misfire and watch-team training. Also, they worked more than 150 off-duty man hours per person ensuring that every Sailor and the system was prepared for this underway.

"When we actually shot the missiles, and they hit the targets, it was such a big relief," said Fire Controlman 2nd Class Brian Jarvi. "Especially considering the extra hours we spent preparing for this moment."

Makin Island's Air Department completed more than 250 day and night AV-8B Harrier landings and take-offs during this at-sea period. The ship embarked 17 pilots from Marine Attack Squadron (VMA) 311 who used these operations to complete essential qualifications of their own.

"Our mission out here is to get initial carrier qualifications for our new squadron pilots," said Marine Capt. Robert Reinoehl, VMA-311 Landing Signal Officer. "In addition to getting night qualifications for some of our more experienced flight leaders and combat wingmen, we [trained] to ensure we can safely conduct operations during our deployment.

Over the past six months Makin Island's Air Department has conducted flight operations with U.S. Navy, Marine Corps and Army and various foreign nations. However, these were the first day/night Harrier operations the ship has completed.

"There was some cross coordination between the ship and the AAV operators themselves, and we [Combat Cargo] spent some time with the Deck Department crew," said GySgt Shane Snyder, Well Deck Combat Cargo Assistant. "We worked on ground guiding the vehicles and what to expect when they came into the Well Deck and when they got up into the upper vehicle stowage area onboard the ship."

"We did a lot of training while we were in San Diego and Pascagoula [Miss.], at PRECOM [pre-commissioning]," said Boatswain's Mate 3rd Class Edward Fiaseu. "We've never done the AAV evolution before, but this being our first time doing it, I was very satisfied with how our junior Sailors performed the tasks. Bravo Zulu to my junior Sailors."

Below decks during this at-sea period, gas turbine engineers from ship's Main Propulsion division worked side by side with civilian technicians to groom aspects of Makin Island's electric drive system.

"With the tuning and upgrades we commissioned into the Auxiliary Propulsion System (APS) these past two weeks, the ship will now use less power to run the electric drive," said Chief Gas Turbine Electric Technician Vinceint Pettigrew. "It'll save more than 300 gallons of fuel every single hour at full APS power, which is 12-plus knots, compared to running a single gas turbine engine at the same speed."

For a relatively short period away from shore, the amount of work and number of successful evolutions performed by LHD8's Sailors and Marines can be used as an indication of the asset Makin Island is already becoming to the fleet.

"It speaks volumes for the quality of our crew that in less than six months, Makin Island has successfully made the transition from Pre-Commissioning to a seasoned member of the Pacific Fleet," said Capt. Robert Kopas, Makin Island's Commanding Officer. "This underway period, we helped qualify or requalify nearly 100 pilots while assisting VMA-311 complete qualifications so they could deploy forward; successfully completed nine of nine engagements with our gun and missile systems; while simultaneously completing a number of internal ship qualifications and tests. The crew's above-and-beyond efforts continue to improve our ship and set the standard."
at 12/15/2009 08:58:00 AM