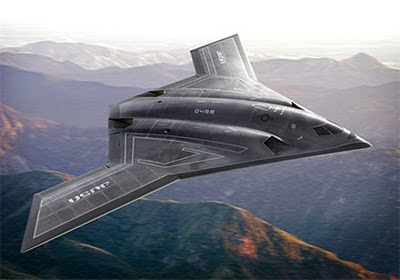 The $2-​​billion question in development of a new bomber is whether a major black-​​world demonstration program is already underway, with Northrop Grumman as the contractor.

This hypothesis makes sense of a series of clues that have appeared since 2005. In that year, Scott Winship, program manager for Northrop Grumman’s X-​​47 unmanned combat aircraft system (UCAS), mentioned that the company—responding to a U.S. Air Force interest in a bigger version of the then-​​ongoing Joint UCAS project—had proposed an X-​​47C with very long endurance, a 10,000-lb.-plus weapon load and a 172-​​ft. wingspan, the same as a B-​​2. The idea was to match extreme endurance with a “deep magazine”—a large and diverse weapon load for multiple attacks on different types of target. Soon after, in the Fiscal 2007 budget, the J-​​UCAS program was terminated. While the Navy continued with the X-47B—now undergoing tests before a first flight in early 2010—it was reported that USAF funds were transferred into a classified program. The service also introduced a budget line-​​item for a Next Generation Bomber (NGB), but the program had no visible funds for Fiscal 2008-​​10.

During 2007, Northrop Grumman leaders hinted that the company expected to win a major restricted program. A financial report in early 2008 then disclosed a $2-​​billion surge in backlog at the company’s Integrated Systems division—just after Boeing and Lockheed Martin agreed to join forces on an NGB proposal.

Since that time, sources in Washington and elsewhere have reported that the company did win a demonstrator program for a large stealthy platform, and that the program has survived the budget cuts announced in April 2009.

A possibly related development is the construction of a large new hangar at the USAF’s flight-​​test center at Groom Lake, Nev. Unlike other buildings on the secluded site, it is screened from the closest public viewing point by a specially constructed berm.

The most likely focus of a flight-​​demonstrator program would be on the aerodynamic and aero-​​propulsion aspects of a very stealthy flying-​​wing design. The B-​​2 was designed in the earliest days of computational fluid dynamics (CFD), before the complex 3D airflows over an all-​​wing aircraft could be simulated properly, and represented a low-​​risk trade between aerodynamics and signatures. Thirty years later, vastly more powerful computing makes it possible to design shapes with better signatures and higher efficiency that nearly ensure they will work in the wind tunnel and in flight. However, a large-​​scale flying demonstrator can incorporate engine inlet and exhaust effects in the design and evaluate stability and control.

High-​​altitude performance could be another goal. The Air Force does not regard the B-​​2 as survivable in daylight because of the risk of visual detection by a fighter aircraft. The B-​​2 cruises at the same altitude as most fighters and can be caught in the best position for visual detection—silhouetted against the horizon. A high-​​altitude aircraft operating at 60,000 ft. or above is less likely to be in this position, and the sky above it is dark.

Using a version of Northrop Grumman’s “cranked kite” configuration—designed to be scalable and adaptable to different flight regimes—a new bomber could be around half the weight of the B-​​2, but about equal in centerline length, allowing it to carry the same types of weapons, possibly up to the size of the 30,000-lb. Boeing-​​developed Massive Ordnance Penetrator, intended to destroy hardened and deeply buried targets.

Northrop Grumman’s development of an NGB could be facilitated by its work on B-​​2 upgrades. Improvements being developed for B-​​2 include changes to the bomber’s rotary weapons launcher, allowing it to carry mixed loads of weapons ranging from Small-​​Diameter Bombs to 2,000-lb. class bombs; a new Ku-​​band active, electronically scanned array (AESA) radar, with the potential for extremely high ground resolution; and stealth-​​compatible high-​​rate satcoms systems.

Bomber supporters have mooted the idea of building and deploying a new bomber/​ISR (intelligence, surveillance and reconnaissance) aircraft in phases. An initial version could be manned, powered by versions of existing engines, and use off-​​the-​​shelf sensors and avionics. Later aircraft could be unmanned or optionally piloted and powered by advanced engines, improving altitude performance or supplying power to directed-​​energy weapons for self-​​defense or attack.

Stealth will be very important to a bomber/​ISR platform, and a key advantage compared to low-​​observable (LO) fighters. According to experts familiar with UCAS programs, blended wing-​​body and flying-​​wing shapes offer two unique attributes. First, they can provide all-​​aspect stealth, with low signatures from the side as well as in the front and rear aspects, whereas more conventional designs (like the F-​​22 and F-​​35) have a characteristic “bow-​​tie” radar cross-​​section (RCS) plot with peaks to the sides, associated with the body sides and vertical tails. Flying wings also feature “broadband” stealth: at lower radar frequencies, the wingtips, tails and other small parts of a conventional aircraft have dimensions in the same magnitude as the radar wavelength and therefore have a “resonant” RCS that is largely unaffected by shaping or materials. Recently, both Russia and China have unveiled modernized versions of VHF radars, touting their counterstealth performance.

ISR capability would be inherent in a new-​​technology strike aircraft. Characteristics such as long endurance, wide-​​band active and passive radio-​​frequency sensors, and LO-​​compatible high-​​bandwidth satcoms are essential for both missions.

Another major issue is whether the new bomber should be nuclear-​​capable. Analyst Barry Watts, in a February 2009 paper for the Center for Strategic and Budgetary Assessments, argued that four conventional requirements were the strongest justification for a new bomber: missions requiring a sufficient radius of action from the last air-​​refueling point to reach targets deep in defended airspace; conflicts in which there is a need to strike targets at intercontinental distances; missions requiring the survivability to persist in defended airspace in order to prosecute time-​​sensitive targets; and operations in which U.S. forces must have a radius of action beyond the reach of enemy weapons.

Watts saw a need for nuclear missions only in the case of limited, controlled nuclear options against a regional threat and suggested only a moderate degree of electromagnetic pulse hardening. Courtesy of DefenseTech – From Aviation Week’s Bill Sweetman
at 12/31/2009 07:19:00 AM