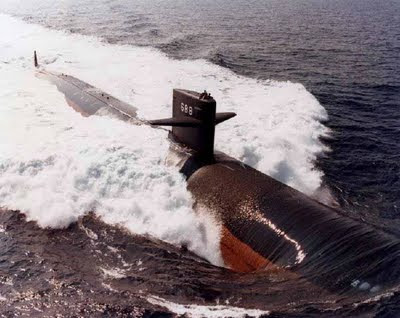 "This was an extremely successful deployment being that it was Los Angeles's final one," said Cmdr. Steven Harrison, commanding officer. "All of the national level tasking for the operational commander and joint training in support of anti-submarine warfare contributed to a very lucrative mission."

Los Angeles, the fourth naval ship to be named after the city, is the lead ship of her class. Her many capabilities include wartime functions of undersea warfare, surface warfare, strike warfare, mining operations, special forces delivery, reconnaissance, carrier battle group support and escort, and intelligence collection.

Launched on April 6, 1974 at Newport News Shipbuilding and Dry-dock Company in Newport News, Los Angeles was commissioned on Nov. 13, 1976. She made her first operational deployment to the Mediterranean Sea in 1977 and was awarded a Meritorious Unit Citation.

In 1978, Los Angeles transferred to the Pacific Fleet and was assigned to Submarine Squadron 7, homeported in Pearl Harbor. The sub and her crew operated with distinction, conducting five Western Pacific, one Indian Ocean, and four Northern Pacific deployments. These operations earned her three additional Meritorious Unit Citations. Additionally, she was awarded her squadron's annual Battle Efficiency "E" for excellence in combat readiness four times.

In July 1992, Los Angeles departed Pearl Harbor for a change of homeport to Mare Island Naval Shipyard, Vallejo, Calif. Arriving on August 6, she commenced the first engineered refueling overhaul of a Los Angeles-class fast attack submarine. During the overhaul, she was outfitted with the latest state-of-the-art sonar and fire control systems, as well as the Navy's newest reactor controls equipment.

Los Angeles returned to an operational status after the 31 month overhaul in March 1995. She was reassigned to Pearl Harbor and is currently attached to Submarine Squadron 1. Since departing Pearl Harbor on her final deployment in May, Los Angeles conducted numerous operations vital to national security and in support of Commander Submarine Force, U.S. Pacific Fleet.

"It was a great deployment for me and I am very honored to have worked with such an outstanding and highly motivated crew," said Culinary Specialist 1st Class (SS) Robert Dare. This deployment is very special to me knowing that we were not only helping to fight the war on terrorism, but also contributing to the history of the Naval Submarine Force."

"It's a bittersweet ending of a great era," said Harrison. I am extremely proud of each and every crewmember. I could not ask for a better way to complete Los Angeles's final mission."