HSC 25 Welcomes Detachment 6 Back from Deployment 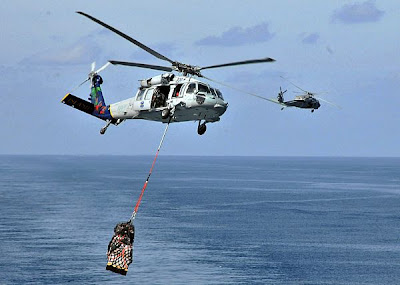 Det. 6 left the island to support the joint military exercises Balikatan 2009 in the Philippines, Talisman Saber in Australia, Annual Exercise (ANNUALEX) 21G in Japan, and humanitarian assistance operations for Taiwan. They flew more than 700 hours to complete 377 sorties and five medical evacuations, while providing search and rescue (SAR) capabilities for the Navy ships' amphibious operations.

"I'm really impressed with their capabilities," said Lt. Cmdr. Ryan Phillips, officer in charge of Det. 6. "They're always on top of things, backing up the pilots whenever possible."

According to Phillips, the goal of the joint exercises was to enhance relations between the U.S. and allied forces and improve coordination for future missions. During ANNUALEX 21G, Det. 6 collaborated with their counterparts in the Japan Maritime Self Defense Force.

Det. 6 helped move food, water, and medical supplies from sea to shore when Southern Taiwan suffered intense flooding and mudslides that claimed the lives of hundreds in August.

"As part of the group of Det. 6, being there to help those people out is very rewarding," said Aviation Structural Mechanic 2nd Class (AW) Lawrence Dave.

HSC 25 is the Navy's only forward deployed vertical replenishment squadron providing deployed ships a rapid, safe, and versatile means of resupplying diminishing stores. In addition, HSC 25 provides 24-hour search and rescue and medical evacuation services for Guam and the northern Mariana Islands.
at 12/17/2009 09:25:00 AM