Military tradition to be evident in Ford funeral events 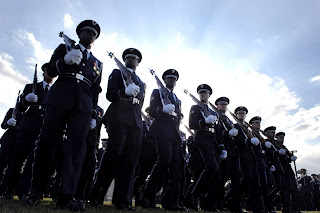 by John J. Kruzel American Forces Press Service
12/28/2006 - WASHINGTON (AFPN) -- Military tradition will be evident throughout the events associated with the Dec. 26 death of former President Gerald R. Ford, as the services join the nation in bidding farewell to their former commander in chief.
Ford's three-stage state funeral will begin Dec. 29 with the former president's remains lying in repose at St. Margaret's Episcopal Church in Palm Desert, Calif. He then will be honored in the nation's capital, and finally in his home state of Michigan, where he will be buried.
President Ford's casket will arrive at Andrews Air Force Base, Md., Dec. 30. A motorcade will travel through Alexandria, Va., where he resided while serving as a congressman and vice president. After a pause at the World War II Memorial -- the former president served in the Navy during the war -- the motorcade will proceed to the U.S. Capitol, where he will lie in state.
President Ford's coffin will be draped in a U.S. flag, with the blue field over his left shoulder. The custom began in the Napoleonic Wars of the late 18th and early 19th centuries, when flags were used to cover the dead as they were taken from the battlefield on a caisson.
Graveside military honors in Michigan will include the firing of three volleys each by seven servicemembers. This commonly is confused with an entirely separate honor, the 21-gun salute. But the number of individual gun firings in both honors evolved the same way.
The three volleys came from an old battlefield custom. The two warring sides would cease hostilities to clear their dead from the battlefield, and the firing of three volleys meant that the dead had been cared for properly and the side was ready to resume the battle.
The 21-gun salute traces its roots to the Anglo-Saxon empire, when seven guns constituted a recognized naval salute, as most naval vessels had seven guns. Because gunpowder in those days could be more easily stored on land than at sea, guns on land could fire three rounds for every one that could be fired by a ship at sea.
Later, as gunpowder and storage methods improved, salutes at sea also began using 21 guns. The United States at first used one round for each state, attaining the 21-gun salute by 1818. The nation reduced its salute to 21 guns in 1841 and formally adopted the 21-gun salute at the suggestion of the British in 1875.
An "order of arms" protocol determines the number of guns to be used in a salute. A president, ex-president or foreign head of state is saluted with 21 guns. A vice president, prime minister, secretary of defense or secretary of the Army receives a 19-gun salute. Flag officers receive salutes of 11 to 17 guns, depending on their rank. The rounds are fired one at a time.
A U.S. presidential death also involves other ceremonial gun salutes and military traditions. On the day after the death of the president, a former president or president-elect -- unless this day falls on a Sunday or holiday, in which case the honor will rendered the following day -- the commanders of Army installations with the necessary personnel and material traditionally order that one gun be fired every half hour, beginning at reveille and ending at retreat.
On the day of burial, a 21-minute gun salute traditionally is fired starting at noon at all military installations with the necessary personnel and material. Guns will be fired at one-minute intervals. Also on the day of burial, those installations will fire a 50-gun salute -- one round for each state -- at five-second intervals immediately following lowering of the flag.
The playing of "Ruffles and Flourishes" announces the arrival of a flag officer or other dignitary of honor. Drums play the ruffles, and bugles play the flourishes - one flourish for each star of the flag officer's rank or as appropriate for the honoree's position or title. Four flourishes is the highest honor.
When played for a president, "Ruffles and Flourishes" is followed by "Hail to the Chief," which is believed to have been written in England in 1810 or 1811 by James Sanderson for a play by Sir Walter Scott called "The Lady of the Lake." The play began to be performed in the United States in 1812, the song became popular, and it became a favorite of bands at festive events. It evolved to be used as a greeting for important visitors, and eventually for the president, though no record exists of when it was first put to that use.
The bugle call "Taps" originated in the Civil War with the Army of the Potomac. Union Army Brig. Gen. Daniel Butterfield didn't like the bugle call that signaled soldiers in the camp to put out the lights and go to sleep, and worked out the melody of "Taps" with his brigade bugler, Pvt. Oliver Wilcox Norton. The call later came into another use as a figurative call to the sleep of death for soldiers.
Ford will be buried with full military honors at his presidential museum in Grand Rapids, Mich., Jan. 3.
(John D. Banusiewicz of American Forces Press Service contributed to this article. Information from Web pages of the Military District of Washington and Arlington National Cemetery was used in this article.)
Photo Credit: Military tradition will be evident throughout the events associated with the Dec. 26 death of former President Gerald R. Ford, as the services join the nation in bidding farewell to their former commander in chief. (DOD photo/Cherie A. Thurlby)
at 12/29/2006 07:06:00 AM