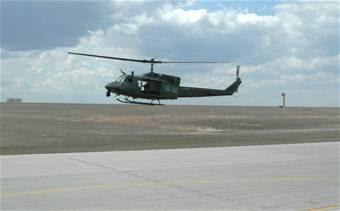 The rotor blades begin to turn and the aircraft starts to vibrate as the UH-1N Huey helicopter prepares for takeoff. The pilot, co-pilot and flight engineer run their checklists, while two security forces members sit in the back of the helicopter ready for anything. Two Pratt and Whitney turboshaft engines lift the UH-1N off the ground as the mission gets underway.

"Tower, this is Blade two-four. We're taking off west, departing your air space to the south east," the pilot radios to the air traffic controllers.

The aircrew takes off to provide a security deterrent in the missile fields found throughout the region.

The mission of the 54th Helicopter Squadron here is to ensure the integrity of the 91st Space Wing's nuclear deterrents by providing immediate, flexible and effective combat helicopter support anywhere, anytime and on time. Due to the size of the area the 91st SW missile complex covers, air travel is the only practical way of reaching remote sites quickly.

"Since 9/11, security has dominated our vision and transformed our mission," said Maj. David Smith, the 54th HS commander. "We have worked very hard to integrate with the 91st Security Forces Group, particularly the tactical response force, to exploit the synergy created by integrating helos and TRF."

The squadron can transport security forces, guard missile convoys and transport equipment anywhere throughout the missile fields, ready to respond to any security situation.

Additionally, Airmen of the 54th HS can support medical evacuations and rescue searches.

During joint task forces Katrina and Rita, 54th HS Airmen deployed two helicopters and three crews to aid in hurricane disaster relief. Their contingent, along with three others that made up the 620th Air Expeditionary Squadron, delivered more than 52,000 tons of lifesaving supplies to devastated hurricane victims.

"Thankfully, we really don't do a whole lot of rescue searches here," said 1st Lt. Zach Pellonari, a 54th HS pilot. "However, we are rigorously trained for all aspects of search and rescue."

The SAR training pilots undergo is in addition to many other training requirements. Helicopter pilot training alone is 18 months long. Additionally, all aircrew members are trained in water and arctic survival and attend prisoner-of-war training.

Lieutenant Pellonari's duties are widened even further by his duties as aircraft commander.

"The senior pilot on a mission is the aircraft commander," he said. "Taking care of forms, making sure everyone's current, etc., are additional duties."

The flight engineers as well have numerous training requirements and are responsible for many of a Huey's functions.

"Most of the stuff I do is pre-flight," said Senior Airman Neal Hardin, a 54th HS flight engineer. "I'm a systems expert for all the systems on the aircraft. I make sure parts and forms are current. I also make sure the weight and balance are correct."

Additionally, a flight engineer is a spotter for the aircraft, guiding the pilots during hovering, landing and cargo pickup.

"The equipment and opportunities that working with helos provide is great," he said. "I like just being here to do things for other people."

"We have the privilege to work with the best aircrews, maintainers and most highly trained and motivated security-forces Airmen in 20th Air Force," he said. "Regardless of the obstacles we face day to day, simply being a part of this team is motivating."

Though the UH-1N has been around since 1970, the aircraft continues to be widely used. There are currently 62 operational UH-1Ns in the Air Force.

"Although the Huey is aging, it is still a capable aircraft," Major Smith said. "The Marine Corps is also using this aircraft in combat operations in Iraq today. With several minor modifications, this aircraft is capable of bridging the gap to the replacement aircraft. I have the utmost confidence in this aircraft and the people who maintain it."

As this mission nears its end, the sun begins to set and the Airmen aim their UH-1N back toward the base.