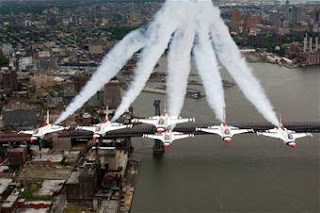 As folks attend air shows this season we continue to receive frequency reports from the field on frequencies that have been heard or uncovered by the various air show performers. We use these reports, including reports that verify the frequencies in our annual MT Air Show Guide, to compile the next guide that will be released in the March 2013 MT.

This latest report comes from another north easterner Brian Topolski. During the Atlantic City air show, “Thunder Over The Boardwalk.” According to Brian "the Thunderbirds were providing a live video feed from inside the jet cockpit to a huge video screen on the Atlantic City boardwalk. Their comm-cart was set up directly on the boardwalk and I was able to get a close look at it. I noticed a rack mounted receiver, and a screen readout of: (CH-3) 4845.0 MHz."

Brian confirmed with one of the team members that the frequency listed above on the comm-cart was providing the video feed.

So this will be an interesting frequency range to explore. Wonder whether the frequency is analog NTSC or the newer digital standard video used by US television stations these days?

That is it for this report. If you attend an air show this season we want to hear from you. Even if the freqs you monitored are in our guide, your report is still valuable to us to confirm and verify the current frequencies being used by the various air show performers. You can reach us in the address in the masthead.