From time to time monitors will pop up and ask about the primary frequencies used by the USAF HFGCS network or someone will publish an old frequency (prior to WARC-92 Aero OR band 3 kHz realignment). I've even still see references in some various online lists to the now no longer active station at MacDill AFB as part of the Global network.

So to set the record straight, here are the latest "published" primary frequencies and stations direct from the Department of Defense for the HFGCS network. 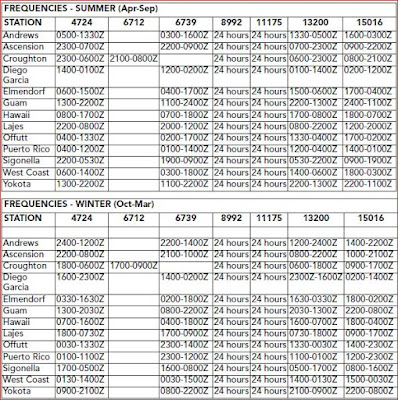 HFGCS is the Department of Defense’s high power, high frequency, over-the-horizon long haul communication system. It's global network operated under the umbrella of the Joint Chief's of Staff and consist of ground stations that provides automated and operator assisted voice services, data transmission and an HF e-mail capability that has an interface to both the classified (SIPRnet) and unclassified (NIPRnet) email networks.

You will find additional information on this system including discrete frequencies on this blog at http://mt-milcom.blogspot.com/2006/05/joint-chiefs-of-staff-hf-gcs-network.html

You will find additional information on the HFGCS ALE network on this blog at http://mt-milcom.blogspot.com/2006/08/hf-gcs-scope-command-hf-ale-network.html

So the next time you see someone list a frequency like 11243 or 13201 or list MacDill as part of this global comm network, now you that you are dealing with very old updated information.