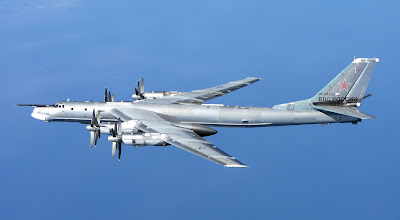 Story by Chris Clint and posted to adn,com

Two Anchorage-based fighter jets intercepted a pair of Russian bombers Monday night off Kodiak Island in what an Air Force commander called the first such flight seen near Alaska in nearly two years.

Lt. Gen. Kenneth Wilsbach, head of both the Alaskan Command and the Alaska NORAD Region, said Tuesday that the detection and intercept of the Tu-95 Bear bombers took place over the course of about two hours from 6 to 8 p.m. Monday.

"I can't go into all of the details on how we detected them, but we did detect them," Wilsbach said. "We were tracking them basically paralleling the Aleutian Islands roughly 100 miles to the south."

In response, two F-22 Raptor jets on standby were launched from Joint Base Elmendorf-Richardson in Anchorage, along with an E-3 Sentry AWACS radar plane. Wilsbach said they were supported by an Alaska Air National Guard KC-135 tanker aircraft launched from Eielson Air Force Base in Fairbanks.

The F-22s intercepted the Bears about 100 miles southwest of Kodiak, Wilsbach said. The propeller-driven bombers didn't have any external signs of weaponry, and the pilots had no verbal contact.

"There is a procedure where we can talk to them, but generally we don't unless it's some sort of dangerous situation," Wilsbach said. "They waved at one another, but other than that there was no communication."