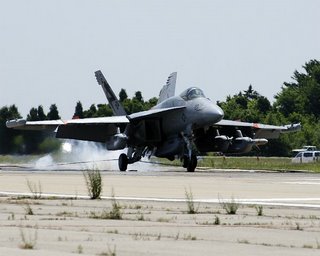 The Growler will replace its aging predecessor, the EA-6B Prowler, as the Navy's air platform for electronic warfare.

"The EA-18G Growler is a first-class aircraft with a key mission at a critical time in our history," said Mullen.

Naval aviation, he explained, has been a very integral part of the nation's defense in both peace and war.

"As we have seen in operations Enduring Freedom and Iraqi Freedom, naval aviation brings revolutionary capabilities to the fight and demonstrates again and again the enduring criticality of naval air power," said Mullen.

The Growler's speed, range and robust self-defense systems will serve as force multipliers for the joint force, Mullen noted.

"Its pilots and crews will employ Growler's systems not just to jam signals," said the CNO, "but to control all aspects of the electromagnetic spectrum to protect our troops and engage our enemies."

Program managers and engineers saved the Navy billions of dollars, Mullen argued, by using innovative methods such as testing cutting edge technology in existing aircraft and then using the already proven F/A-18 E/F Super Hornet's airframe to create the aircraft.

"Less than three years ago, we signed the contract, and here we are today, on schedule and under budget with a new electronic attack aircraft that exceeds every performance measure," said Mullen.

Mullen praised the men and women flying electronic warfare missions for the Navy in the war on terrorism and stressed the importance of getting Growler to the fleet.

"This roll-out comes none too soon," said Mullen, "because as we speak, the Growler's predecessors are themselves flying vital missions over Iraq and Afghanistan, and they need to be replaced as soon as possible.

"I recently visited some of our Prowler crews in Iraq. I can tell you that they are superb and, like all the Sailors and Marines I met there, are doing remarkable work. It is hard, grueling, vital work. In some ways and in some places, the most vital we are doing."

The CNO also acknowledged the hard work of all those involved in designing and building the Growler.

"You can be justifiably proud of this fine aircraft you have provided our Navy and nation," said Mullen. "Right now, day in and day out, naval aviators bet their lives on your aircraft, flying at sea, far from land, and in combat over some of the most remote places on earth. They are succeeding in their tough missions because of the terrific aircraft you have built for them."

The Growler must still undergo test and evaluation, beginning with a first flight planned in the next two weeks, a month earlier than expected. 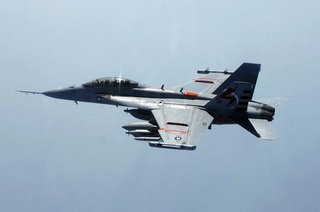