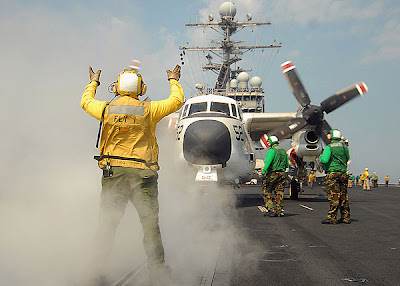 Blog Editor Note: For east coast milcom monitors here is another chance for an excellent monitoring opportunity. I already have one report of 8204.0 kHz USB being used by the Iwo Jima ESG for CWC net comms.

More than 15,000 service members from four countries will participate in Joint Task Force Exercise (JTFEX) 08-4 "Operation Brimstone", July 21-31 in North Carolina and off the eastern U.S. coast from Virginia to Florida.

"This exercise is a tremendous opportunity to train; not only as the Navy and Marine Corps team, but with our joint and coalition partners as well," said Commander, 2nd Fleet Vice Adm. Marty Chanik.

"JTFEX 08-4 will flex our warfighting capabilities from the operational level through expeditionary strike force and strike group operations with several of our coalition partners – France, Brazil and the United Kingdom."

The exercise also marks the first time that forces from Navy Expeditionary Combat Command are participating in an East-Coast JTFEX. NECC forces operating in the littorals and riverine environment are supporting integrated operations.

The Navy Expeditionary Combat Task Group (NECTG) is made up of: Riverine Group 1 staff augmented with personnel from throughout the NECC force, Riverine Squadron 1, Maritime Expeditionary Security Squadron Ten, based in Jacksonville, Fla.; an air detachment from Naval Construction Forces Naval Mobile Construction Battalion 11 based in Gulfport, Miss.; Navy Cargo Handling Battalion 3, based in Alameda, Calif.), and Explosive Ordnance Disposal Unit 6 plus EOD Support Unit based at Little Creek, Va.

Below are ships in the JTFX exercises. In parentheses are command units that will be embarked on board.

In addition, the following forces are participating in the exercise simulating opposition forces: