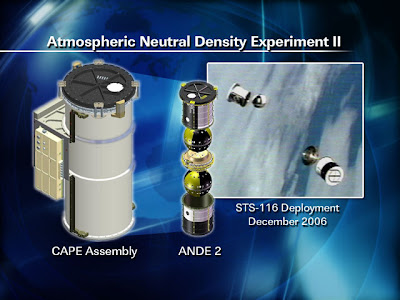 Blog Editor's Note: Want a shot at monitoring an orbiting spacecraft? Hams, Scanner Enthusiast and other radio hobbyist have a chance to monitor these two Navy satellites on their amateur band downlinks at 145.825 MHz. See AMSAT notice at the end of this post.

The ANDE-2 satellite suite consists of two nearly perfectly spherical micro-satellites with instrumentation to perform two interrelated mission objectives. The first objective is to monitor the total atmospheric density along the orbit for improved orbit determination of resident space objects. The second objective is to provide a test object for both radar and optical U.S. Space Surveillance Network sensors.

ANDE-2 is a low-cost mission designed to study the atmosphere of the Earth from low-Earth orbit by monitoring total atmospheric density between 300 and 400 kilometer altitude. ANDE-2 data will be used to improve methods for the precision orbit determination of space objects and to calibrate the Space Fence, a radar space surveillance system belonging to the Air Force 20th Space Control Squadron, a principal resource for tracking low-Earth orbiting space satellites.

Because of ANDE-2's particular design requirements, a new deployment technique was developed by the Air Force Space Test Program and tested with the ANDE Risk Reduction (ANDERR) flight in December 2006. The primary ANDERR mission objective, a test of the Shuttle deployment mechanism, was successful.

The ANDE project was conceived and developed at NRL, by Andrew Nicholas of NRL's Space Science Division. The mission consists of two microsatellites with the same size but different masses sent into orbit at the same time: the lighter satellite, known as Pollux, and the heavier satellite, Castor.

Each satellite contains a small lightweight payload designed to determine the spin rate and orientation of the satellite from on-orbit measurements and from ground-based observations. The two microsatellites will slowly separate into lead-trail orbit to provide researchers an opportunity to study small-scale, spatial and temporal variations in drag associated with geomagnetic activity.

Both satellites will be fitted with an array of 30 retro reflectors and will be observed by the U.S. Space Surveillance Network and domestic and international satellite laser ranging sites. The variation in observed position will be used to determine in-track total density. Scientists will determine its position in relation to the passive satellite to compute total density and validate drag coefficient models. In addition, instrumentation on board Castor will measure density and composition.

A joint effort between the Space Science Division and the Naval Center for Space Technology to routinely process and analyze the ANDERR data has led to improved orbit determination and prediction using an atmospheric model correction method. The ANDE data provide a valuable tool for correcting deficiencies in atmospheric models and have led to advancements in miniature sensor technology. These advancements are pivotal for multi-point in-situ space weather sensing. The DoD Space Test Program will provide launch services for the ANDE-2 mission.

These spherical satellites are 19 inches in diameter and will be tracked by the Satellite Laser Ranging systems and the Space Surveillance Network.

The main objective of Atmospheric Neutral Density Experiment - 2 (ANDE-2) is to measure the total atmospheric density between 100 and 400 km. The density data that is gathered will be used to improve orbit determination calculations of the orbits of resident space objects.

ANDE-2 consists of two spherical micro satellites. These satellites are launched from the Space Shuttle cargo bay into a circular orbit just below the International Space Station altitude.

Both satellites will be tracked by the Satellite Laser Ranging (SLR) system and the U.S. Space Surveillance Network (SSN). These satellites have the same dimensions, but have different masses. Because of the difference in mass, the satellites will drift apart over time. Observing the satellites' position will provide a study on spatial and temporal variations in atmospheric drag associated with geomagnetic activity.

ANDE-2 uses two spherical microsatellites which are launched from the Space Shuttle cargo bay. Both satellites are 19 inch diameter spheres, have a mass of 50 and 25 kg, and are constructed of aluminum. The surface of both spheres contains an embedded array of sensors including 30 retro reflectors, six laser diodes for tracking, and six photovoltaic cells for determining orientation and spin rate. Both spheres also have thermal monitor systems. The ANDE spacecraft are located inside the Internal Cargo Unit (ICU). The ICU is made of three aluminum sections. Each section is separated by a light band separation system. Once ejected from the cargo bay, the ICU will separate and deploy the ANDE spheres at a safe distance from the shuttle.

Castor and Pollox, two satellites in the Atmospheric Neutral Density Experiment (ANDE) program are ready to fly with the launch of STS-127 from Kennedy Space Center. The ANDE mission consists of two spherical spacecraft fitted with retro-reflectors for satellite laser ranging (SLR). The constant and well-determined cross section and surface properties of the ANDE spacecraft provide an ideal set of objects for monitoring atmospheric drag and the calibration of space surveillance network (SSN) assets both radar and optical.

Castor
Castor is a 19 inch diameter aluminum sphere with a mass of 63 kg. It is as near perfect sphere as possible given the constraints of cost and manufacturability. The sphere is split in half with e delrin disc. The hemispheres are also the satellite antenna. For power, the satellite has 112 19AH lithium primary cells. This provides about 7000 watt-hours of power which has to last for the one year mission.

The satellite has several different types of sensors. There are two main sensors, a Neutral particle wind and temperature spectrometer and an ion mass spectrometer.

A group of college students designed and built a MEMS sensor payload to test some commercial gyroscopes and a magnetometer. There are also six light sensors and six temperature sensors mounted in the satellite hemispheres.

Pollox
The Pollux satellite was originally to be a passive satellite with retroreflectors for laser ranging. It has been turned into a high school student project involving several schools in the Fairfax County, Virginia area.

The electronics is based on cubesat hardware developed at the Naval Research Laboratory and Stensat Group LLC.