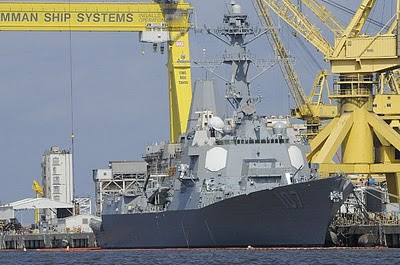 WASHINGTON (NNS) -- The Navy officially accepted delivery of the future USS Gravely from Northrop Grumman Shipbuilding during a ceremony July 26 in Pascagoula, Miss.

Designated DDG 107, Gravely is the 57th ship of the Arleigh Burke class.

The ship successfully completed acceptance trials June 28. Due to the oil spill currently affecting the Gulf of Mexico, the trials were slightly modified, with the ship conducting pierside tests and inspections by the Navy's Board of Inspection and Survey (INSURV), followed by a 36-hour underway period to assess the ship's main propulsion, auxiliary, steering, damage control equipment, navigation systems, and deck equipment as well as overall completeness.

"Though the oil spill forced us to modify our normal trial schedule, we were still able to deliver Gravely as originally scheduled," said Capt. Pete Lyle, DDG 51 class program manager in the Navy's Program Executive Office (PEO) Ships. "That is really a testament to the maturity of the class, and the program's successful history of delivering ships on time and on schedule."

Gravely is a multi-mission guided-missile destroyer designed to operate in multi-threat air, surface and subsurface environments. The ship is equipped with the Navy's Aegis Combat System, the world's foremost integrated naval weapon system. The class provides outstanding combat capability and survivability characteristics while minimizing procurement and lifetime support costs due to the program's maturity. The DDG 51 program continues to reinforce affordability and efficiency, with a commitment to deliver ships at the highest possible quality.

As one of the Defense Department's largest acquisition organizations, PEO Ships is responsible for executing the development and procurement of all major surface combatants, amphibious ships, special mission and support ships, and special warfare craft. Currently, the majority of shipbuilding programs managed by PEO Ships are benefiting from serial production efficiencies, which are critical to delivering ships on cost and schedule.
at 7/27/2010 07:54:00 AM