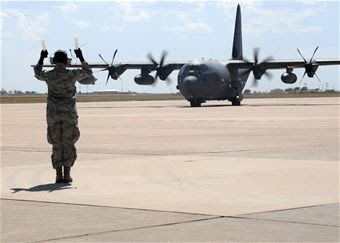 Lt. Gen. Eric E. Fiel, the AFSOC commander, and Brig. Gen. Stephen Clark, the AFSOC director of plans, programs, requirements and assignments, were part of the official party flying the aircraft here for delivery to the 522nd Special Operations Squadron from the Lockheed Martin plant in Marietta, Ga.

"We can carry about 40 percent more, it's about 25 percent more powerful and 15 to 20 percent faster," Pendleton said. "It's entirely computerized; this allows us to better complete our mission."

A few of the Combat Shadow II's capabilities are to provide nighttime low-level infiltration and exfiltration, aerial refueling of helicopters and tilt-rotor aircraft, aerial delivery and resupply of special operations forces and ground refueling, officials said.

Fiel said it's a historic event for Cannon Air Force Base and "marks a milestone in improving the combat capabilities of AFSOC and more importantly the 27 SOW.

"Members of the 522nd SOS will rewrite history as they fly the MC-130 farther, faster and higher," he said. "As innovative Air Commandos, you will push this plane to its limits and find creative ways to employ our people more effectively."

Col. Buck Elton, the 27th SOW commander, spoke briefly on the significance of receiving the new aircraft and what it means for AFSOC's mission.

"This newest version of a combat proven aircraft has big shoes to fill, but there is no doubt that the MC-130J will take specialized mobility to a new level," he said. "This incredible new aircraft will quickly become the backbone of our nation's C-130 fleet. This is an exciting time for our base, our command and our Air Force."
at 10/07/2011 07:56:00 AM