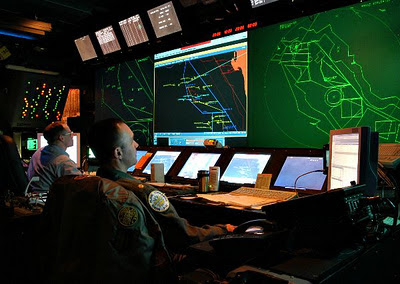 Operations Specialist 1st Class Derrick L. Johnston from Meadville, Pa., (left) tracks interceptions of aircraft and reports them to the Tactical Actions Officer (TAO), Lt. Cmdr. Michael J. Yager from Troy, N.Y., (right) in the Combat Direction Center (CDC). CDC is the nerve center of the nuclear powered aircraft carrier, USS Enterprise (CVN 65). This is where information is collected, processed, displayed, evaluated, and disseminated from sources outside and inside the ship. U.S. Navy photo by Photographer's Mate Rob Gaston. (RELEASED)

USS ENTERPRISE, At Sea (NNS) -- The Combat Direction Center (CDC) aboard aircraft carrier USS Enterprise (CVN 65) participated in a variety of training exercises as part of the carrier's composite training unit exercise (COMPTUEX) while underway in the Atlantic Ocean Jan. 16.

The CDC is responsible for tracking and identifying all surface, air and sub-surface contacts and communicating the acquired information throughout the ship and the strike group.

Computer systems and radars fill the spaces of CDC, and Sailors from many rates work together to gather, process, display and disseminate information.

"From intelligence to navigation, everything runs through CDC," said Chief Operations Specialist James Allen Cowling, the leading chief petty officer of the Operations Intelligence division. "We have things in there that we have to send all the way up to the Pentagon so they can make strategic, big-picture decisions, not only for our forces, but for all forces, based on the information received."

One of the many systems CDC utilizes is the Tactical Data Link system. The "Link" allows all information gathered across the strike group to be shared and updated.

Another important and advanced system that CDC uses is the Global Command and Control System-Maritime (GCCS-M), simply referred to as "geeks."

"GCCS-M is a system that can see the location of ships all over the world and gather input and intelligence," said Operations Specialist 3rd Class Alcides J. Fuentes, a GCCS-M operator in CDC.

"Our 'geeks' personnel can see input from other ships around the world, so that helps us track contacts and put our game plan together," said Operations Specialist 1st Class Reginald L. Washington, the leading petty officer of the Operations Intelligence Division.

CDC is important to operations and the work center trains constantly. The training consists of performing numerous surface and air contact drills.

"To train for surface contacts, we often run drills that involve numerous ships coming into the vital area of our strike group," said Washington "We track them with our weapons ready as a precaution, and we have to identify them. If a contact becomes hostile, we take further measures."

"We take control of our vital area," said Operations Specialist 3rd Class Danielle L. Robinson, a "geeks" system operator in CDC. "We can't let unknown contacts sit there. We use surface trackers and automatic identifying systems to identify and label contacts in a timely fashion."

Washington said when training for air contacts, CDC sometimes holds a "detect to engage" exercise, which simulates an actual engagement where an aircraft or missile breaches the ship's security range. CDC then tracks the contact, readies weapons and prepares to launch aircraft or its own defensive weapons.

The tactical action officer stands watch in the CDC and is the only person aboard, except for the commanding officer, with weapons release authority.

CDC has thus far completed all of their training exercises successfully and will continue training throughout COMPTUEX.
at 1/21/2012 07:19:00 AM