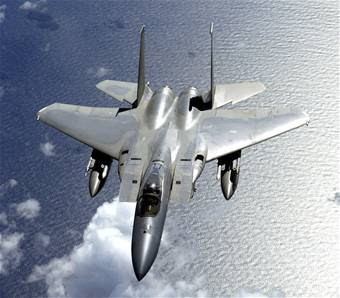 The cause of that accident is still under investigation, however, preliminary findings indicate that a possible structural failure of the aircraft may have occurred. The suspension of flight operations is a precautionary measure.

The Air Force will ensure mission requirements are met for worldwide operations normally accomplished by the F-15. Current F-15 flying locations include bases in the continental United States, Alaska, England, Hawaii, Japan and the Middle East.

While the F-15 continues to serve its country well, the Air Force is replacing its aging F-15 fighters with its fifth generation of air superiority, the F-22 Raptor. The F-22 is the world's most advanced fighter aircraft combining stealth, supercruise, maneverability and integrated avionics to provide unmatched warfighting capabilities in both air-to-air and air-to-ground missions.

The F-15 Eagle is an all-weather, extremely maneuverable, tactical fighter designed to permit the Air Force to gain and maintain air supremacy over the battlefield.

The F-15C, D and E models were deployed to the Persian Gulf in 1991 in support of Operation Desert Storm where they proved their superior combat capability. F-15C fighters accounted for 34 of the 37 Air Force air-to-air victories. The F-15E's were operated mainly at night, hunting SCUD missile launchers and artillery sites using the LANTIRN system.

They have since been deployed for air expeditionary force deployments and Operations Southern Watch -- the no-fly zone in Southern Iraq, Provide Comfort in Turkey, Allied Force in Bosnia, Enduring Freedom in Afghanistan and Iraqi Freedom in Iraq.
at 11/05/2007 07:17:00 AM