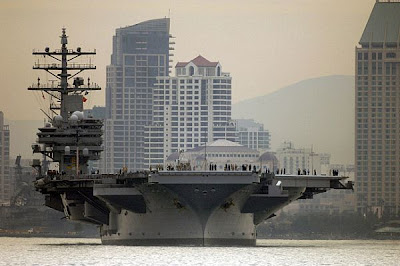 The two days of sea trials were the final phase for the PIA and were designed to assess Ronald Reagan's material readiness and ability to rejoin the fleet as a fully operational unit.

"The completion of this availability is the culmination of an incredible amount of effort invested into the future capability of Ronald Reagan," said Capt. Terry B. Kraft, Ronald Reagan's commanding officer.

"I'm proud of the fact that we executed the availability safely, with no significant injuries to Reagan or Puget Sound personnel. Completing early was our goal from the beginning - it's great to be back in action," added Kraft.

From advanced combat systems and electronics installation, improved berthing compartments and new deck tiles, Ronald Reagan received more than $150-million in renovations and upgrades since entering the PIA cycle in May. Prior to PIA, Ronald Reagan completed a six-month deployment in 2006 to support the global war on terrorism, as well as a three-month surge deployment to the Western Pacific in early 2007.

Ronald Reagan Sailors joined shipyard workers from Northrop-Grumman's Puget Sound Naval Shipyard for a special picnic Oct. 18 in the ship's hangar bay prior to sea trials, celebrating the end of the PIA maintenance period. During the picnic, Kraft addressed the crowd of Sailors and contract workers before a traditional cake-cutting ceremony to mark the end of the PIA period.

"I want to recognize the crew and the shipyard workers who put a lot of hard work into getting this PIA finished on time," said Kraft.

According to Kraft, the PIA improved the overall command and control capability, warfighting readiness and interoperability of the ship's systems, and provided valuable cross-training for the crew of America's flagship.

"Focused execution was the goal for this PIA," said Kraft. "We completed one of the safest and most efficient PIA periods ever for an aircraft carrier."

According to A. J. "Tony" Gonzalez, the PIA program manager from Northrop-Grumman, Ronald Reagan's six-month maintenance period was extremely successful. "The preplanning that went into this project before started and the communication between the officers and crew of the ship and the shipyard workers were the key to finishing the project on time," said Gonzalez.

The leadership of Ronald Reagan was also able to capitalize on numerous training opportunities during the maintenance period by sending dozens of Sailors to technical schools, cross-decking opportunities to other ships, and continuing an aggressive enlisted surface and aviation warfare specialist program.
at 11/01/2007 07:58:00 AM