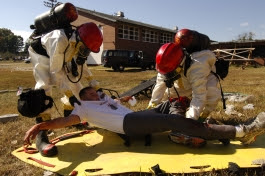 WASHINGTON -- A deadly bomb ripped into the Hart Senate Office Building shortly after 9 a.m. Monday, throwing the region into ... another Capital Shield exercise that primes the readiness of the military to lock arms with local and federal interagency partners in response.

With the region boarding up, stripping the store shelves bare of milk and bread, and otherwise preparing for Hurricane Victoria fictitiously churning her way up the coast of Virginia, U.S. Northern Command had already told Joint Force Headquarters National Capital Region to begin operations as Joint Task Force NCR. Forces from NORTHCOM were already on site to augment JTF-NCR.

Capital Shield 08 was the third in the series of exercises conducted by JFHQ-NCR and the first with Maj. Gen. Richard J. Rowe Jr. in command.

"The exercises provide a tremendous opportunity to practice individual and unit skills required to fulfill our tasks as assigned by U.S. Northern Command," Maj. Gen. Rowe said. "Also, most importantly, we are able to exercise joint operations, techniques, procedures and command and control relationships with our joint, interagency and intergovernmental partners.

"Capital Shield enhances our ability to communicate internally and with our interagency partners, and to test how well we are able to marshal resources and achieve a unity of effort toward primary goals."

Emergency preparedness plans for JTF-NCR run along three lines of operation, and all - homeland defense, continuity of operations, and mitigation of disaster -- were being taken out, tested, polished and assessed for refinements and other improvements.

"I want you all to ask yourselves three questions," Maj. Gen. Rowe told his command: "What was the plan? How did we do? What might be changed?"

This critical assessment, to be rolled up in hot washes, after-action reports and courses of action, is what will be "the hard work" of the exercise, Col. Willie E. Gaddis, JFHQ-NCR chief of staff, said.
The exercise took place as national attention turned to wildfires in Southern California fueled by Santa Ana winds. News of the efforts there were tracked even as exercise participants and planners dealt with a terror attack scenario that was found to be the work of Al Qaeda and a spate of tornados spawned by the collapsing hurricane - a tropical storm as it blew through the National Capital Region Monday evening, damaging Walter Reed Army Medical Center and requiring the evacuation and relocation of patients.

attack filtered in stages, sometimes incorrect, and always with the sense that something more might happen at any time. Exercise injects from the simulation cell ensured just that.
The bomb at the Hart Office Building turned out to be two bombs, vehicle-borne IEDs, and another blast took place in the Capitol Rotunda itself. An exercise taking place at Andrews Air Force Base brought word that a chlorine tanker truck was exploded inside the west gate of the base, which served as the aerial port of debarkation for many of the arriving joint forces being brought in to meet security and other needs.

The attack on the congressional campus activated support arrangements with JTF-NCR that brought quick deployment of two of its first-responder units: the Marine Corps' Chemical, Biological Incident Response Force and the Army's 911th United States Army Technical Rescue Engineer Company - CBIRF (pronounced as two syllables) and the 911th Engineers, for short.
As the sole field training exercise in this year's Capital Shield, the units deployed to the former D.C. Youth Correctional Facility at Lorton, Va., where physical operations could take place without disrupting the activities of Congress, or at least not add to the disruption already afoot as rallies staged by protesters snarled traffic and brought a handful of arrests.

The Lorton site has been used in earlier Capital Shield exercises courtesy Fairfax County, which took over the entire prison complex in 2002 and has plans for development that mark the dormitories and other reformatory structures for demolition and use as parkland. Fairfax, a partner in past Capital Shield exercises, had just completed certification training for its technical-rescue crew a few weeks earlier, so limited its participation to "white force" assistance with the exercise rather than rolling in beside their military counterparts.

The buildings could be partly demolished and a massive incident command structure could be set up under the eye of the District of Columbia Fire Department and the Washington Regional Office of the Federal Bureau of Investigation.

Capt. Wayne Benson of D.C. Fire & Emergency Medical Services took charge as the incident commander at the Lorton/Hart site, and the incident command post also linked the FBI, whose agents treated the site as a crime scene even as CBIRF and the 911th were staging for their recovery efforts. Capt. John Sollers, a colleague of Benson's, took over for operations on days two and three.

The Quantico Marine Corps Base Fire Department came in to take part in the exercise beside the 911th and the CBIRF technical rescue platoon, which had its own "rat maze" in the facility to search. A light labor platoon from the 3rd U.S. Infantry Regiment (The Old Guard) gave additional help.

Others on site included both observers and participants from the U.S. Army Corps of Engineers Structural Engineers branch, which has recently been brought into the response plans and exercises for NCR events. Tom Niedernhofer explained the role of the engineers, who would come from district offices throughout the East Coast, as providing professional engineering assistance for the working crews, keeping a step ahead of them in assessing shoring loads or the like, and increasing the marginal level of safety.

Among the tools brought was a device to focus optically on a point on a structure wall and gauge movement of the wall to less than a quarter of an inch.

Some of the engineers had worked in Washington or in New York after the 9/11 attacks, and one was a veteran of the Oklahoma City bombing response.

Lt. Jay Branson, a 911th Engineers platoon leader, enlisted in the Army in the wake of 911 and sought after the assignment "rescuing people" after he commissioned into the Engineers, having had combat engineer experience.

"This is the point of the spear," Branson commented as he passed a two foot length of 2x4 through an opening made by an acetylene torch in a heavy metal door. "This team will push forward as quickly as they can; others will come behind to improve and expand their work, search for and remove trapped victims."

"There's asbestos and other bad stuff in the air," Branson noted, explaining the need to wear filter respirators even with fresh air being pumped in to displace the smoke and carbon dioxide that was being generated as part of the field problem. The first crews in had to carry their own canisters of air, which could be refilled with the company's vehicle-mounted equipment.

Company Commander Capt. Frank Tedeschi said the smaller scale of this year's exercise had the advantage of allowing the company's special projects section to set up a maze that would challenge the more perishable skills called for. "We know what we need," Tedeschi said, but larger exercises sometimes narrow the range of skill sets called for to some of the most easily learned, breaching concrete, for example.

"One of the things we know we will need is shoring," Capt. Tedeschi said. The site gave plenty of that experience, both within the structure and with an external trench that opened an alternative, below-grade avenue of approach into the structure.

As the exercise advances, Capt. Tedeschi promised, a roof collapse would isolate the forward team, a door being opened would tip over containers of chlorine, and a high-line entry into the final "rat maze" would be there "as a challenge for the over-achievers."

Outside of the Lorton FTX site, the focus was on the Joint Operations Center. There questions of requests for forces, force protection measures, intelligence relating to attacks in New York City, cyber attacks, logistics, cost simulations, status of infrastructure, air operations environment and when effects and end states were achieved such that the end of exercise could occur, personnel could be released and the command settle back into its normal pace of business.

It is a more complicated environment in many respects than at the site of the crisis - for example, finding and treating the 50 role-playing victims in the CBIRF mass casualty exercise.
"We don't have a single plan to support emergencies, but rather a series of plans, all nested under the U.S. Northern Command emergency preparations plan to support the National Response Plan and the National Incident Management System," Maj. Gen. Rowe said.

"We are part of the federal response when the state requests capabilities they do not possess or have expended on other missions," Maj. Gen. Rowe said. "This falls under the framework of the National Response Plan and the National Incident Management System. Our joint force efforts represent an incredible DoD effort along with the National Guard and our DoD agency partners such as Pentagon Force Protection Agency, the Defense Threat Reduction Agency, and NORAD as well as our uniformed teammates from the US Coast Guard.

"During incidents of national significance, the Department of Defense and the Joint Forces Headquarters National Capital Region bring special skills, special equipment, communications and information-sharing capabilities to bear in the NCR. If needed to save lives, prevent human suffering or mitigate great property damage, we can act immediately," Maj. Gen. Rowe concluded. "Otherwise when authorized by proper authorities."

The Capital Shield 08 exercise wrapped up Wednesday. A week prior, national-level exercises Vigilant Shield and TopOff 4 occupied U.S. Army North, U.S. Northern Command, the Department of Homeland Security and others in dirty bomb attacks in Guam, Oregon and Arizona.
At Capital Shield "EndEx," military assistance was still being staged and forwarded to fight the California wildfires through the same mechanisms that the National Capital Region defenders practiced.

Maj. Gen. Rowe declared himself "awestruck" and "very thankful as a commander" for the partnerships that were so in evidence for the Capital Shield FTX.
at 11/01/2007 08:10:00 AM