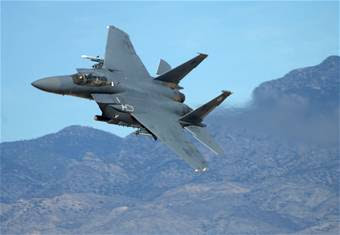 Grounding a fleet of nearly 700 front-line aircraft has significant operational impact. Total force, joint and coalition partners were able to mitigate that impact.

The cause of the mishap remains under investigation. Air Force maintenance and operations professionals and industry experts are working with the accident investigation board to examine all aspects of the mishap. At the same time, structural engineers have conducted in-depth technical reviews of data from multiple sources. We continue to proceed in an inclusive and transparent fashion to derive, as best as humanly possible, the cause of the mishap.

We evaluated the grounded fleet. First, we focused on the F-15Es. They are the newest F-15s and have been exposed to less stress. They are structurally different than the A-D models. Problems identified during years of A-D model usage were designed "out" of the E-model. Given these differences, and after consultation with Warner Robins Air Logistics Center and the AIB, we returned the F-15E fleet to flying status following successful inspections.

Next, we concentrated on the remainder of the grounded fleet. The AIB is now focused on the area just aft of the cockpit and slightly forward of the inlets. Warner Robins ALC mandated a thorough inspection and repair of all structural components in this area. I have directed each F-15 aircraft be inspected and cleared before returning to operational status. Today, ACC issued (a flight crew information file) and Warner Robins ALC issued an Operational Supplemental Tech Order to further direct and guide your pre-flight and post-flight actions.

The F-15 is a formidable war fighting aircraft and workhorse for our Air Force. I applaud each and every Eagle pilot, WSO and maintainer for the meticulous and disciplined way you approached this challenge. Mission accomplishment entails risk. Together, we must remain vigilant and focused on operational risk management to mitigate this risk. Airmen speak up when they see something wrong. I rely on you to ensure all operations and maintenance parameters are in order before flight. The F-15 community can take great pride in the fact that you have met this challenge. We must deliver air power on time, on target given our overriding duty to defend our Country. (End Quote)

In releasing the F-15 fleet to fly, General Corley said the Air Force was accepting a degree of risk.

"We accept this risk because of our overriding duty to provide unrivaled combat air power for the defense of our Country," the general said.
at 11/24/2007 08:28:00 AM