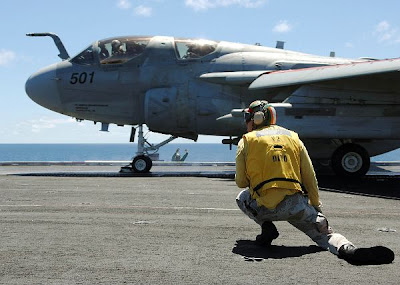 The "Rooks" of Electronic Attack Squadron (VAQ) 137, provide electronic warfare for Carrier Air Wing (CVW) 1 and the Enterprise Carrier Strike Group in the Persian Gulf in support of Maritime Security Operations as well as Operations Iraqi and Enduring Freedom.

Based out of Naval Air Station Whidbey Island, Wash., the "Rooks" are the only CVW 1 squadron stationed on the West Coast. They provide support for the men and women on the ground and in the air with electronic warfare from their EA-6B Prowlers.

"We provide specific protection by helping control the electromagnetic spectrum," said Cmdr. Jim Lins, commanding officer of the Rooks. "This way our troops are able to use that spectrum offensively and defensively."

To carry out a task of this magnitude the Rooks are fully prepared and at the head of the game. With many versions of the EA-6B, the Rooks are unique in that they fly the newest and most advanced version, the Improve Capability III. VAQ consists of four aircraft and 210 personnel; 180 enlisted and 30 officers.

"Prowlers are a national asset high in demand but there are only a handful in the fleet," said Lins.

The EA-6B Prowlers do not get much down time. Flying an average of seven missions each day, and working eight days on and one day off, the Rooks are keeping busy and working rigorously to complete the mission each and every day.

"With this being our second deployment back-to-back, sometimes keeping the crew focused while fighting complacency can be difficult," said Lins.

Lins credits the high morale of his crew members with making this deployment easier.

"I have an extraordinary group of Sailors and chief mess that makes not only my job easier, but also helps keep motivation high," added Lins.

Keeping motivation high and battling complacency is a challenge, but knowing the job directly impacts others helps make that challenge easier.

"We have such a great crew here working together as a team toward completing the mission," said Stem. "Each and every one of us holds the Rooks in high regard and constantly completes the job in a timely and efficient manner."

The hard work and dedication of VAQ 137 has earned the squadron four Navy Unit Commendations, three Meritorious Unit Commendations, six Battle E's, three Navy Expeditionary Medals and two Armed Forces Expeditionary Medals. They have received one Humanitarian Service Award, four Safety "S" Awards, a Prowler Excellence Award, and have been selected as the "Prowler of the Year" twice. They have also been awarded the prestigious Admiral Arthur W. Radford Award four times. It is the highest achievement in electronic warfare for all VAQ and VMAQ (Marine Tactical Electronic Warfare) squadrons.

At the end of each day, the VAQ 137 crew members go to
bed knowing they have done something important to make a difference in the lives of others.