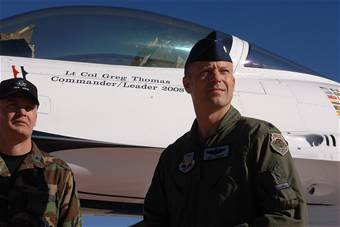 Each airframe will receive a Block 52 upgrade, which includes the Falcon Structural Augmentation Roadmap program, also known as Falcon STAR. This program replaces or repairs the known life-limited structures to avoid the onset of widespread fatigue damage in order to maintain flight safety, enhance aircraft availability and extend the life of affected components.

Additionally, Ogden ALC’s 309th Maintenance Wing and 508th Aerospace Sustainment Wing are partnering to remove the weapons system from the aircraft and will replace it with a smoke generating system. Each aircraft gets a new red, white and blue paint job too.

"If these aircraft were needed in a combat situation, they can be reverted back to combat-ready in three days," said 1st Lt. Elbert Mose, a program manager with the 508th Aircraft Sustainment Group. "We have never had a situation where that has happened, but in 72 hours we could put the guns system back into a plane and they'd be completely ready."

Colonel Thomas said the delivery of the first air show-ready Thunderbird is significant to more than would-be air show spectators.

"This is about more than just fancy maneuvers in the sky," he said. "It's exciting because you see the high level of dedication and commitment that Team Hill has put into the airplane, and you know it's the same product our warfighter Airmen are taking into combat."

The Air Force is already upgrading its F-16s through the common configuration implementation program. The Ogden ALC is slated to de-modify an older series of Thunderbirds to the Block 32 version in order to make them combat ready, in addition to several other common configuration implementation program modifications that occurred earlier this year.

These aircraft will eventually replace the current Thunderbirds and should be ready for the 2009 show season. 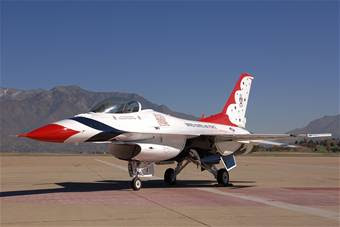 On display at Hill Air Force Base, Utah, is the first of many new Block 52 F-16s provided to the Thunderbird Aerial Demonstration Team. The 11 airframes are scheduled to receive Falcon STAR modifications and a smoke generating system modification. These newly converted aircraft are slated for delivery for the 2009 show season. (Air Force photos by Alex Lloyd)
at 11/03/2007 06:31:00 AM