Blog editor note: I have been in the 2SOS control center for a tour several years ago. What a neat operation and an even neater experience to be in the same building that controls the majority of the US military satellites. It was part of a tour of Schriever and NORAD's Cheyenne Mountain conducted by the Air Force for the MT editorial staff. Truly a journey of a lifetime and a milcom hobbyist rush. 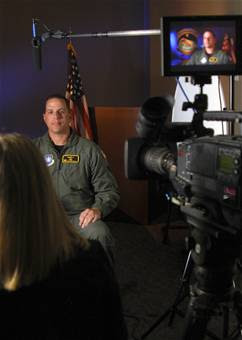 SCHRIEVER AIR FORCE BASE, Colo. -- Is GPS a modern marvel? A three-person film crew from Actuality Productions visited the base Oct. 30 to find out.

"We want to capture how the operations center works," Ms. Eggert said. "That's how we operate - we like to be the fly on the wall."

The first experimental GPS satellite launched Feb. 22, 1978. Former President Ronald Reagan made GPS available to the public in 1983 after Soviet interceptors shot down a Korean Airline jet that was in restricted airspace.

Applications of GPS technology were few and far-between until the first Persian Gulf conflict. That changed when the Gulf War coalition VII Corps used GPS to aid its "left hook" maneuver, surprising an Iraqi army that considered its southern deserts unnavigable.

Former President Bill Clinton turned off selective availability in 2000, allowing civil users to access GPS' high-quality precision navigation. Since then, its use has taken off. The timing signal is now used for financial transactions, for synchronizing power systems and cell phone towers, and even for regulating traffic signals. The navigation signal sees such diverse uses as automated farming equipment, small-diameter bombs, artillery systems, airlines and the space shuttle.

Some of these applications came as a surprise to the Actuality Productions crew.

"I knew GPS had a lot of uses, but I didn't know you used it at the gas pump," remarked Kem Stralka, the crew's sound expert.

The GPS segment will be a portion of the overall episode focused on the technological marvels of the 1990s, Ms. Eggert said.

"The main thing we do is explain how things work - how a little receiver is able to tell you where you are," she said.

Other segments in the episode will feature the development of DVDs, digital video recorders and the World Wide Web. Each episode requires about a week of preproduction, eight to 12 days of filming and two weeks of post-production.

But is GPS a modern marvel? When you consider that it supports more than 1 billion users and is estimated to provide about $30 billion in the world wide maket in equipment and services by 2008, the answer is an unequivocal yes, Colonel Kuntzelman said.

"GPS is the world's gold standard for all-weather, day-and-night, 24/7, 365-days-a-year precise positioning, navigation and time transfer," he said. "GPS is absolutely a modern marvel, and we have the world's best active-duty and Reserve Airmen, government civilians and contractors, all working as one team to make it happen."
at 11/17/2007 07:48:00 AM