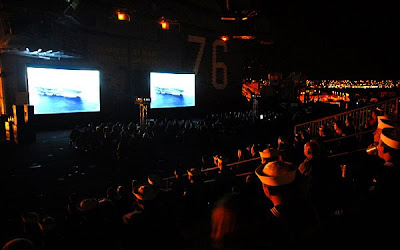 The two-hour movie, which will air in high definition, Nov. 27 at 8 p.m., on the National Geographic Channel, features Ronald Reagan on its recent surge deployment in the 7th Fleet area of operations from January to April 2007.

National Geographic partnered with Indigo Films to send two video crews to live on board Ronald Reagan for three weeks during the deployment, shooting 150 hours of film to create the two-hour finished product.

"It was such a whirlwind trip, there was so much to take in," said Kathryn Gilbert, one of the documentary's producers.

"I feel like I could spend a month showing footage from the trip," said Gilbert. "How you encapsulate an aircraft carrier, and all the amazing people that make it work, into 90 minutes is impossible. We definitely did the best that we could."

Ronald Reagan's Command Master Chief, Master Chief (SW/AW) Jim Delozier, felt that the documentary was a great experience that would help the American public understand the military, especially the Navy.

"The aircraft carrier is the biggest asset of the U.S. Navy," said Delozier, "Anytime you come on an aircraft carrier and just watch flight operations, it gives people confidence in the Navy."

With the San Diego city skyline as an atmospheric back light, Ronald Reagan's crew ate popcorn on the flight deck, watching themselves as the stars in high-definition and Dolby surround sound. Sailors cheered when seeing themselves on the big screen.

"Our crew loved it," said Delozier. "We're gone for six months, back for a few months, and then gone again for another three months. The American people need to know, and they need to see our young Sailors that are doing these great things for the country."

"The documentary will show the traditional side of the Navy," said Ship's Serviceman 3rd Class Jessica Gutierrez, a Sailor on board Ronald Reagan. "It'll also show the new Navy. We have almost a whole new crew. [And at the end of surge] we were already at our best and ready."

As credits rolled across the screen, with a final shot of the Ronald Reagan making its way home, Sailors stood from their seats giving a standing ovation.

"It was amazing to see all the different people who came together to make this work," said Gilbert. "It was the Sailors, the crew, which made this an amazing experience. It's definitely about the crew, and it will be a memory I will not soon forget."

Ronald Reagan was commissioned in July 2003, making it the ninth and newest Nimitz-class, nuclear-powered aircraft carrier. The ship is named for the 40th U.S. president; its motto, "Peace through Strength," was a recurring theme during the Reagan presidency.
at 11/20/2007 08:52:00 AM