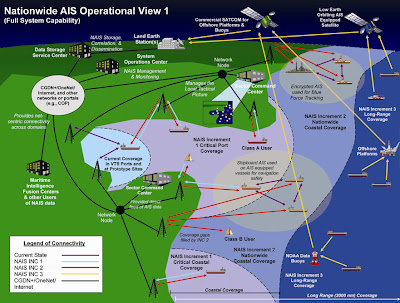 The Homeland Security Department is getting ready to request proposals for help with implementing the core aspect of the Coast Guard’s nationwide communication system that will improve how ships correspond with one another and communicate with shore stations.

Once fully deployed, the Nationwide Automatic Identification System (NAIS) will be a maritime digital broadcast system intended to boost the Coast Guard’s maritime domain awareness, or understanding the nautical environment.

Increment one of three of the system, which allows 55 critical ports and nine coastal areas to receive messages, was completed at the end of fiscal 2007.

Toward the end of December, the Coast Guard plans to formally ask for proposals from companies to design, develop and deliver NAIS’ core system to fulfill the first phase of Increment 2 of the project.

The service has said it chose to implement NAIS in three increments because it will enable the Coast Guard to start using the technology sooner and demonstrates its progress in complying with the Maritime Transportation Security Act of 2002.

The Coast Guard says it is considering multiple contracting approaches for the award. According to the notice, Phase 2 of Increments 2 and 3 will be separate procurements.

The service will be host a site visit for interested contractors at its training center in Cape May, N.J., in early January 2008. A technical library of current capabilities and system design guidance is also available online at http://uscg.mil/nais/.