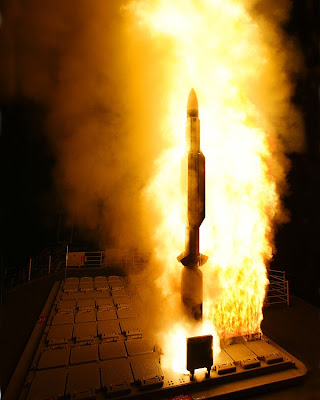 A Standard Missile-3 (SM-3) is launched from Pearl Harbor-based guided-missile cruiser USS Lake Erie (CG 70) to intercept a threat representative target as part of a Missile Defense Agency test of the sea-based capability under development. This was part of a multiple simultaneous engagement involving two ballistic missile targets that were intercepted about 250 miles from Kauai and approximately 100 miles above the Pacific Ocean. The SM-3 was one of two interceptors launched from the ship that collided with two ballistic missile targets launched from the Pacific Missile Range Test Facility in Kauai, Hawaii, within minutes of one another. (U.S. Navy photo)

Air Force Lt. Gen. Henry 'Trey" Obering, director of MDA said that this was MDA's latest "hit to kill" intercept flight test conducted jointly with the U.S. Navy off the coast of Kauai.

For the first time, the operationally realistic test involved two unitary "non-separating" targets, meaning that the target's warheads did not separate from their booster rockets. This was the 32nd and 33rd successful "hit-to-kill" intercepts since 2001.

Approximately two minutes later, the Lake Erie's crew fired two SM-3 missiles, and two minutes later they successfully intercepted the targets outside the earth's atmosphere more than 100 miles above the Pacific Ocean and 250 miles northwest of Kauai. The intercepts used "hit to kill" technology, meaning that the targets were destroyed when the missiles collided directly with the targets.

The Kongo used the test as a training exercise in preparation for the first ballistic missile intercept test by a Japanese ship planned for later this year. This event marked the fourth time an allied military unit participated in a U.S. Aegis BMDS test.

MDA and the Navy cooperatively manage the Aegis BMD Program. Lockheed Martin Maritime Systems and Sensors of Moorestown, New Jersey is the Combat System Engineering Agent and prime contractor for the Aegis BMD Weapon System and Vertical Launch System installed in Aegis-equipped cruisers and destroyers. Raytheon Missile Systems of Tucson, Arizona is the prime contractor for the SM-3 missile and all previous variants of Standard Missile.
at 11/08/2007 07:32:00 AM