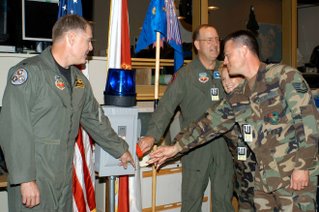 After more than 37 years of monitoring America's airways, the flip of a ceremonial switch on November 17, 2006, marked the close of operations here for the Southeast Air Defense Sector.

More than 100 members of the tight-knit SEADS fraternity looked on as Continental U.S. NORAD Region leaders marked the passing of the SEADS mission while celebrating its impending transformation to the 601st Air Operations Center.

"It's an emotional and historic event," said Colonel David Kriner, former SEADS, and now 601 AOC, commander, "as we are now actively re-rolling this mission, closing one chapter and opening another in supporting this war-fighting headquarters as an Air Operations Center."

SEADS responsibility for air defense of the southeastern United States began in April 1982 following its transfer from Duluth, Minn., where it had served as the 23rd Air Division under the Aerospace Defense Command since November 1969. In October 1996 SEADS transitioned completely to the Air National Guard and became a Geographically Separated Unit assigned within the Florida Air National Guard.

Since then its responsibility for defense of approximately 1,000,000 square miles of airspace, and 3,000 miles of coastline from Virginia to Texas, marked SEADS as the busiest of CONR's three sectors.

"This decision was made nearly four years ago to first modernize the air defense system, and then consolidate CONR's three air defense sectors into two as we transitioned into an AOC" said Col. Kriner. "To facilitate that CONR moved the WADS responsibilities further to the east, while NEADS area of responsibility extended further south, all the way down to the Straits of Florida."

As for the 601 AOC, Colonel Kriner said the next step in the migration involves training.

"We've got more than 250 full-time Air National Guardsmen that need to be trained and integrated into the processes of an AOC in providing air tasking order and strategy-to-task functions," he said.

"You know, these days, a lot of people talk about finishing well. Well I can tell you, this team finished well," he said. "They held it together while we moved toward the AOC mission through holidays, hurricanes and missed time with families - it was truly a job well done."