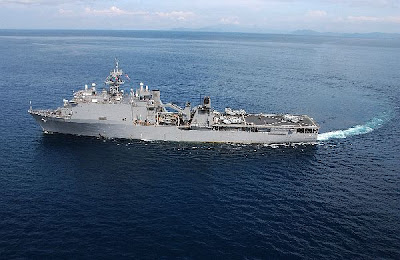 VIRGINIA BEACH, Va (NNS) -- USS Fort McHenry (LSD 43) returned to its homeport, Naval Amphibious Base Little Creek, May 4 after a seven-month deployment as the first platform for Africa Partnership Station (APS), an initiative working with countries from West and Central Africa promoting maritime safety and security.

APS is a concept designed to increase maritime safety and security through regional partnerships using an at-sea platform like Fort McHenry, which produces maximum results while leaving a minimal footprint ashore.

"I think the amphibious platform ships are great because they bring a shallow draft, berthing for housing students and portable classrooms," said Lt. Cmdr. Thomas C. Kait, executive officer aboard Fort McHenry. "These ships have a lot of flexibility to be able to help in many ways, in an area of the world that has not had much attention in awhile. I think we are heading in the right direction because a safe maritime environment is good for everyone."

"Fort McHenry worked with non-governmental organizations such as Project Hope, USAID (Agency for International Development) and the U.S. Navy program, Project Handclasp, to bring relief and aid to many people in need," said Cmdr. Daniel P. Shaw, commanding officer aboard Fort McHenry. "With the help of Fort McHenry, Project Handclasp was able to donate more than 1 million high nutritional meals, 25 pallets of medical, hygiene and educational supplies along with hospital beds and medical equipment valued at over $100,000."

While in port, numerous Sailors from Fort McHenry, HSV-2 Swift and APS staff gave of their liberty time to participate in 23 community relations projects. More than $65,000 was spent on various projects ranging from building picnic tables for the Gamboa School in Sao Tome and Principe to completely replacing the roof of the Matanda School in Port Gentil, Gabon.

"Any commanding officer of any ship would be proud of this crew and what they did as far as their primary mission to help build the foundation for maritime safety and security in the Gulf of Guinea. That sounds so small, but in the end, you look at what they accomplished and it is phenomenal," said Shaw.

Fort McHenry had more than 250 members from the ship participate in community relations projects (COMRELs)throughout the deployment. The crew restored the material condition of dozens of school classrooms and hallways, maternity clinics, orphanages, and wildlife preservation parks. The crew also sent out special teams to address specific needs requested by the host nation. By actively engaging the local community in each port, the Fort McHenry Sailors built strong partnerships that made a positive impact which helped form the foundation for future engagements.

"I went to more than 20 COMRELs, but the most memorable one that I did was at a rescue shelter called Empire, which was for children who lost contact from their families and stay there until their families are found," said Operations Specialist Seaman, Cody Thompson. "It made me feel good being able to do so many COMRELs. When I found out that we were doing COMRELs, I could not wait to go to as many as I could."

Being a concept, it is not necessary for APS to be led by the U.S. from a large ship such as Fort McHenry. APS can continue with small mobile training teams, aircraft detachments, or a ship from one of the partner nations. APS will continue to deliver the right training based on the needs of the host nations in the region.

"One of the things that we have promised and put our prestige on the line with the African countries is that we will be persistent in our presence here off of West and Central Africa," said Rear Adm. Anthony M. Kurta, U.S. Naval Forces Europe. "So while we've had ships deployed here over the last couple of months, we need to keep that presence going for the next many years."

Fort McHenry was part of the premiere overseas trial of a new technology. Working with the HSV-2 Swift, USNS 2nd Lt. John P. Bobo (T-AK 3008) and USNS Lance Cpl. Roy M. Wheat (T-AK 3016), the Fort McHenry crew helped exercise a new capability where a floating platform was built eight miles off the coast of Liberia. The Roll On-Roll Off Rapid Discharge Facility and the Improved Navy Lighterage System had previously only been tested under limited conditions. The open ocean test and evaluation of the concept was key to building new capabilities for Navy Sea Basing efforts.

"A ship does not go to sea alone. The real burden of a deployment rests with families who watch their loved ones leave on a mission, that there is not much knowledge about, is an extended surge deployment for us. Our friends and family who support us carry an enormous burden. Without the support from them, I don't think that anybody could do without that kind of support, so I say thank you all for your support," said Shaw.

Part of the U.S. Navy's Global Fleet Station, APS provides a platform with the capacity and persistent presence to support sustained, focused training and collaboration on a regional scale to maritime partners in West and Central Africa.

Commander Task Force 365 and training teams from various U.S. and European military commands, as well as governmental and non-governmental organizations were embarked aboard Fort McHenry to enhance cooperative partnerships.
at 5/05/2008 06:55:00 AM