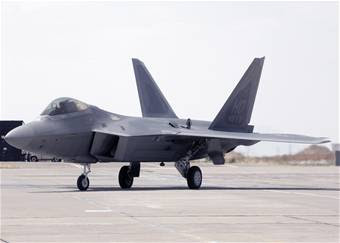 "I am proud that the Air Force Reserve has been invited to participate in so many new mission areas and that we are here today, and included from the beginning, during the stand up of the F-22 at Holloman," said Lt. Gen. John A. Bradley, the AFRC commander.

As an associate unit, the Air Force Reserve squadron members will fly and maintain the aircraft with their active-duty counterparts. The 49th FW officials will own the aircraft.

Reserve planners expect to establish the 44th Fighter Group at Holloman AFB and assign 260 Airmen there by 2010.

"I believe that associate units, such as we have at Holloman, are the best way forward to maximize the Air Force's combat effectiveness and harness the inherent synergies we share between the active and Reserve forces," General Bradley said.

"We have partnered with Pacific Air Forces during the stand up at Elmendorf, and I would like a similarly successful stand up here with Air Combat Command," General Bradley said. "The Air Force Reserve provides the world's best mutual support to the Air Force and our joint partners."

The 301st FS was originally part of the "Red Tailed" 332nd Fighter Group of the famed Tuskegee Airmen. The squadron has an impressive combat heritage dating back to activation and combat service in World War II.

While the historical 7th and 9th Fighter Squadrons flew their combat sorties over the Pacific waters and islands, the 301st FS spent World War II in the European and Mediterranean theaters of operation.
at 6/10/2008 06:46:00 AM