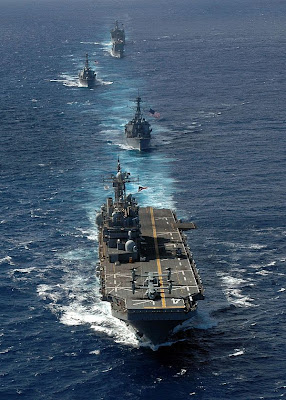 The ships entered the region as part of an ongoing rotation of forces, demonstrating the United States' continued resolve toward enhancing regional security and promoting long-term stability.

"Our Sailors and Marines really enjoyed the chance to learn from our many multinational partners and contribute to the team effort in the region," said Lineberry. "PE 08 provided an excellent opportunity for all participants to share their ideas on maintaining safety and security, while building relationships and enhancing our interoperability."

While in the area, the NAS ESG will assist Commander, U.S. Naval Forces Europe (CNE) conduct the full range of maritime operations and theater security cooperation in concert with coalition, joint, interagency and other partners in order to advance security and stability in Europe and Africa.

The NAS ESG will also support the 2008 CNE operational objectives to improve maritime safety and security in Europe and Africa; be prepared for any contingency; provide exceptional stewardship to the regional workforce and their families; advance the art and science of maritime operations; advance awareness of the harmony of partner and U.S. interests and activities; and support U.S. European Command, U.S. Africa Command and other Navy Component Commanders.

The NASSG and its 2,800 Sailors and Marines were first in the region from Feb. 25-April 24, where they visited nine different countries and conducted several community relations projects. The strike group's operations in 6th Fleet included participation in Phoenix Express 2008 (PE 08), a two-week maritime exercise designed to increase the interoperability and collective maritime proficiencies of participating nations. In total, 3,100 service members from 11 nations participated in the U.S.-hosted, multinational exercise.

As the deployment sails forward, the NAS ESG will continue to execute its mission of providing the joint or combined force commander with a scalable maritime force capable of a full range of military options that is flexible, agile and quick to respond when called upon. The NAS ESG will further support the other tenets of the Navy's Maritime Strategy, which include forward presence, deterrence, sea control, power projection, and humanitarian assistance/disaster response.

The Maritime Strategy represents a new vision for the 21st century and establishes new capabilities to codify longstanding challenges, while maintaining focus on enduring naval missions.

"We are very pleased with our many accomplishments and milestones that we have achieved thus far during this deployment," said Lineberry. "The team is ready as we continue to perform our many missions and take each day and challenge as they come."
at 6/23/2008 07:45:00 AM