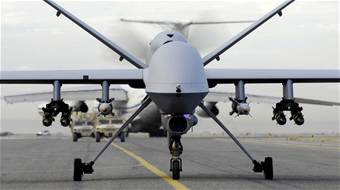 A fully armed MQ-9 Reaper unmanned aerial vehicle taxies down the runway at an air base in Afghanistan on its way to a wartime mission. (U.S. Air Force photo/Staff Sgt. Brian Ferguson)

"Our MQ-1 and MQ-9 crew training is the key enabler allowing us and our (Air Force Special Operations Command), British and Air National Guard partners to execute our combat mission," said Col. Chris Chambliss, the 432nd AEW commander. "Standing up the AEW will not detract one bit from our training requirement."

Members of the 432nd Wing's 15th Reconnaissance Squadron first deployed Predators in support of operations Enduring Freedom and Iraqi Freedom, respectively, in 2004. Since then, six additional combat squadrons, including four distributed Air National Guard units, have been activated. The 15th RS, later the 15th Expeditionary Reconnaissance Squadron, had maintained operational control of the combat air patrols flown by these units.

"The combination of three active duty and four Air National Guard units, as well as AFSOC and our British coalition partners, all executing daily combat missions in support of U.S. Central Command, had grown beyond the appropriate scope of the original mandate," Colonel Chambliss said. "Our Air Force leadership concluded that an expeditionary wing structure was needed to control these missions, synchronize efforts and be responsible to the 9th (Air Expeditionary Task Force) commander."

The wing's maintenance operations and organization will also be affected by the designation, Colonel Chambliss said.

"There had never been a provision for command and control of continental United States maintenance support," Colonel Chambliss said. "While some maintainers have been deploying forward as attached expeditionary units that support launching and recovering MQ-1 and MQ-9 combat missions, many more remain here to maintain the equipment used to execute the (remote split operations) mission. These maintainers will now be directly aligned to our expeditionary mission."
at 6/02/2008 10:22:00 AM