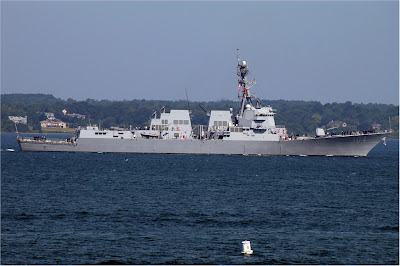 Designated hull number DDG 104, the new destroyer honors Andrew Sterett (1778-1807), appointed lieutenant in the U.S. Navy in 1798 and assigned to the USS Constellation as third lieutenant. During the quasi-war with France, he served with Capt. Thomas Truxtun onboard Constellation, capturing the French frigate L’Insurgente in 1799. By 1800, he had risen to the rank of first lieutenant. He was soon given command of the schooner Enterprise. In June 1801, he sailed Enterprise from Baltimore to serve with the Mediterranean Squadron and captured a 14-gun Tripolitan warship and her 80-man crew during the Barbary Wars. Sterett continued his Navy career until he resigned his commission in 1805. Three previous ships have carried his name: DD 27, DD 407 and DLG/CG 31.

Secretary of the Navy Donald Winter, will deliver the ceremony's principal address. Michelle Sterett Bernson, a descendant of the ship’s namesake, will serve as sponsor of the ship. The ceremony will be highlighted by a time-honored Navy tradition when Sterett Bernson gives the first order to “man our ship and bring her to life!”

The 54th Arleigh Burke class destroyer, Sterett is a multi mission ship that can conduct a variety of operations, from peacetime presence and crisis management to sea control and power projection, in support of the National Military Strategy. Sterett is capable of fighting air, surface, and subsurface battles simultaneously and contains a myriad of offensive and defensive weapons designed to support maritime defense needs well into the 21st century.

Cmdr. Brian P. Eckerle of Jasper, Ind., will become the first commanding officer of the ship and will lead the crew of 276 officers and enlisted personnel. The 9,200-ton Sterett was built by Bath Iron Works, a General Dynamics company, and will be homeported in San Diego, Calif. The ship is 509 feet in length, has a waterline beam of 59 feet, and a navigational draft of 33 feet. Four gas turbine engines will power the ship to speeds in excess of 30 knots.
at 8/07/2008 08:44:00 AM