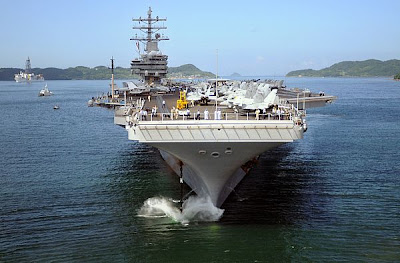 This marks the fifth port visit for CSG 7 during its 2008 Western Pacific deployment, and the second visit to Malaysia by USS Ronald Reagan. The carrier last visited in June 2006.

"Our Sailors plan to do some sightseeing and shopping in this magnificent country," said Capt. Kenneth Norton, Ronald Reagan's commanding officer. "They'll also make a positive impact for the needy ashore."

More than 320 strike group Sailors will volunteer their time and efforts in eight community service projects in Malaysian orphanages, schools and homes for the elderly.
Sailors will have opportunities to explore Malaysia during Morale, Welfare and Recreation activities, including rock climbing, elephant rides in Kuala Gandah and tours of downtown Kuala Lumpur and historical Malacca.

The Ronald Reagan Carrier Strike Group is currently in the U.S. 7th Fleet's area of responsibility as part of a routine deployment to promote peace, cooperation and stability in the region. Homeported in San Diego, USS Ronald Reagan is the Navy's newest Nimitz-class aircraft carrier.
at 8/20/2008 09:31:00 AM