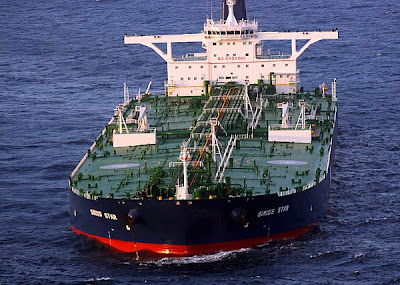 The Liberian-flagged oil tanker MV Sirius Star is at anchor Wednesday, Nov. 19, 2008 off the coast of Somalia. The Saudi-owned very large crude carrier was hijacked by Somali pirates Nov. 15 about 450 nautical miles off the coast of Kenya and forced to proceed to anchorage near Harardhere, Somalia. U.S. Navy photo by Aviation Warfare Systems Operator 2nd Class William S. Stevens (Released)

The ship is owned by the Saudi Arabian-based Saudi Aramco and is operated by Vela International. The crew of 25 includes citizens of: Croatia, Great Britain, Republic of the Philippines, Poland and Saudi Arabia.

This attack comes amid a decrease in the rate of successful pirate attacks on merchant vessels off the coast of Somalia. Combined Maritime Forces (CMF) data analysis has shown that the combination of both military and civilian involvement in the area has reduced the percentage of successful piracy attacks from 53 percent in August to 31 percent in October.

"Our presence in the region is helping deter and disrupt criminal attacks off the Somali coast, but the situation with the Sirius Star clearly indicates the pirates' ability to adapt their tactics and methods of attack" said Vice Adm. Bill Gortney, commander, Combined Maritime Forces.

"Piracy is an international crime that threatens global commerce. Shipping companies have to understand that naval forces can not be everywhere. Self-protection measures are the best way to protect their vessels, their crews and their cargo."

Out of 15 recent pirate attacks in the Gulf of Aden, at least 10 involved ships operating outside the International Maritime Organization's (IMO) recommended traffic corridor or failing to employ recommended self-protection measures, making them more vulnerable to a successful attack.

"Most notably, none of the vessels had embarked security teams. Embarked security teams would have prevented these successful attacks," said Gortney. "Companies don't think twice about using security guards to protect their valuable facilities ashore. Protecting valuable ships and their crews at sea is no different."

To put the challenge into geographic perspective, the area involved off the coast of Somalia and Kenya as well as the Gulf of Aden equals more than 1.1 million square miles. That is roughly four times the size of the U.S. state of Texas or the size of the Mediterranean and Red Seas combined.

In response to a noticeable increase in piracy attempts, the Combined Maritime Forces directed Aug. 22 the establishment of a maritime security patrol area (MSPA), a moveable area overlaying the IMO's recommended traffic corridor. Merchant mariners have been actively encouraged to travel through the IMO-designated traffic corridor and employ reasonable self-protection measures to deter piracy attempts.

"The sea is the lifeblood of our global economy, and it is appropriate the coalition, NATO and other international partners work together to address this problem," said Royal Navy Commodore Tim Lowe, deputy commander, Combined Maritime Forces. "The reduction in the rate of successful piracy attempts shows that the coalition's efforts to deter and disrupt piracy while supporting the shipping industry as they implement appropriate self-protection measures is working."

In addition to coalition naval forces, ships and aircraft from several other nations, including a NATO task force, are operating in the region. Their ranks are soon to be augmented by an European Union force of an undetermined composition. While no formal agreement exists between the navies, communication has been constant and effective to ensure optimal use of assets in a unified goal.

"While a military force cannot solve the problem, the solution lies ashore, we welcome the assistance of additional forces," said Lowe. "The long-term solution to piracy requires an international and interagency response. More forces allow us to address this issue and 'hold ground' while also continuing our ongoing maritime security operations in the area."

As it is evident with the attack on Sirius Star, increasingly daring attacks are being conducted by Somali pirates on a variety of merchant vessels. On Nov. 11, a United Kingdom warship successfully thwarted a pirate attack on a Danish shipping vessel and boarded the pirate ship responsible. During the course of the boarding, the team engaged the pirates in self-defense resulting in a number of fatalities. Such incidents highlight the complications associated with operating in this environment and the need for a permanent and effective land-based solution to the security situation in the region.

Coalition maritime forces conduct maritime security operations under international maritime conventions to develop security, which promotes stability and global prosperity in the maritime environment. These operations complement the counterterrorism and security efforts of regional nations.
at 11/21/2008 06:58:00 AM